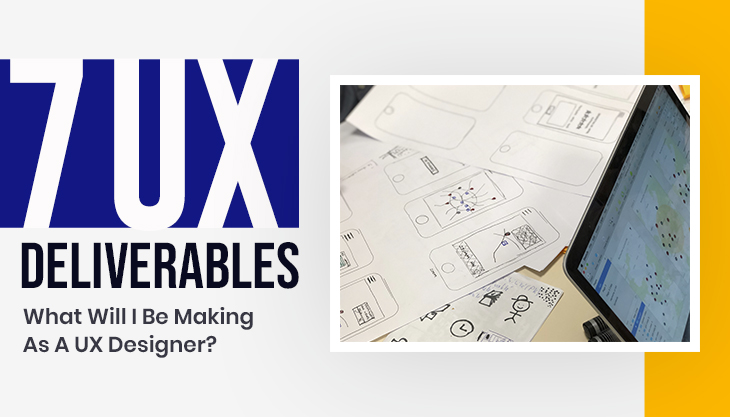 7 UX Deliverables: What Will I Be Making As A UX Designer?

UX Deliverables is a term given to the different outputs produced in the UX design process in the various stages, but the deliverables or the outputs are not same in the process, they vary according to the methods and tools employed by different designers. In UI and UX Design Companies It is the UX Deliverables, drafted and crafted by the UX Designers which allow the users to have an amazing experience.

The crafting of the UX Deliverables need a specific way of thinking, and a particular approach. This approach has further 5 basic phases which every UX Designers should have.

1 ) Empathize – The UX Designers should be able to empathize with the audience.

2 ) The designers should be able to address the problems of the users.

3 ) The drafting of the deliverables need new ideas.

4 ) The Designer should have the gall to convert ideas into design.

5 ) The last step or phrase is evaluating the design.

1 ) User Flow: User flow is a representation ( mostly virtual ) of the steps a user needs to follow for a specific product or service provided by the designer, to reach the goal for which the user is using that product or service. But, there lies an exception, and that is all the external factors. The user flow records only what happens to your product at the end and whether it was able to suffice the customer or not. These diagrams can help designers quickly evaluate the efficiency of the process needed to achieve a user goal.

2 ) Brain Storming: In Brainstorming, a group of UX designers come together to work. Their main focus in this approach is on how they can address the issues and opportunity which they identified in the user research phase. In this all the designers are allowed to think individually from all the angles. They need to think of as many ideas as possible and ultimately sprout the most craziest notions.

3 ) Personas: Persona ( usually a fictional character ) is a depiction of a typical user – his or her goals ,motivation, frustration and skills. Information such as demographics and education backgrounds complete the persona. The designers generate a number of persona, depending on the scope of projects to cover the widest amount of users possible.

5 ) Customer Journey Map: This is a diagram or representation which maps the journey of the customer – that is what steps were taken by the user, to reach a specific goal. It includes the changes in context as well as the motivations, problems and needs along the way. This helps the designers to better understand what services might fit the user and also understand the users problems.

6 ) Sitemaps: These show the hierarchy and navigation structure of a website. Such maps are also often produced for mobile apps, as well. Sitemaps work to divide the content into different sections, these divisions mostly follow the way a typical users would transition from one service to other.

7 ) Analytics Report: When you have provided the user with a service, it helps the designers to get insights into it. This data include users’ transitions and behaviors in your product. It allows the user to understand the areas where the services and the products may be improved.

The UI and UX Design Companies work everyday to provide better user experience and services to the users. As said earlier there are many other deliverables but the main ones are presented here above, for you.