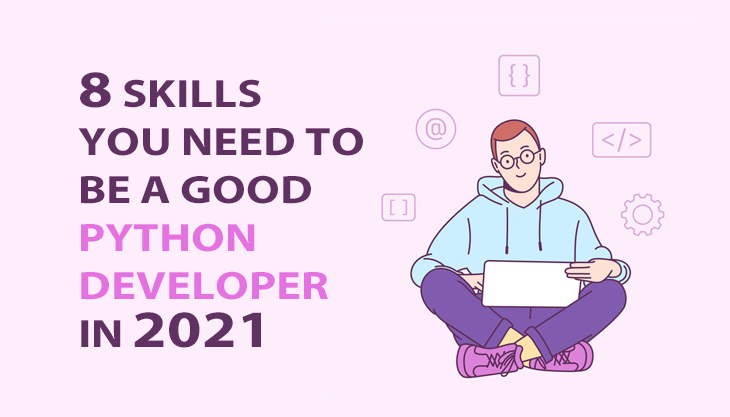 With the constantly growing popularity of the Python programming language, Python developers are high in demand. Python language is widely used by developers hence it became a solution in many different areas in the industry. From web applications to data science and machine learning-Python language is finding its attention. There are many skills an individual needs to learn to become a Python developer. In this blog, we are going to see in detail the structured method, professional bits of knowledge, and skills required to learn Python. Here we are going to discuss entry-level python developer skills that one will need.

Who Is A Python Developer

A python developer can be a data analyst, data scientist, web developer, software engineer, and automation analyst. Python developers can be any one of the abovementioned.

Why Become A Python Developer

Python was the widely used programming language. Due to its simplicity and growing demands are captivating enough to turn into a Python developer. The demand for a python developer has increased throughout the years. Some of the in-demand skills are

Expertise In Core Python: The developer should have sound knowledge of core python and it is the essential language that you are going to use at work to complete the project. Python is an open-source and object-oriented programming language with constantly increasing demand. It has a steep learning curve and it is beginner-friendly. The developer needs to have deep knowledge of core Python. The developer should be well versed in basic concepts of Python including iterators, generators, exception handling, file handling concepts, OOPs concepts, data types, Generators, and variables.

Python Frameworks: Having a better understanding of Python frameworks is very essential. The developer should have to clear with the concepts of Python Frameworks. But, the developer need not know all the core concepts of the Python framework. Based on the project you may be asked to know one or more, but generally used are CherryPy, Flask, and Django. The most used Python web frameworks are Django and Flask. Flask is the widely used framework by developers and it is the micro web framework. In case, if you have exposure to Python, you had a chance to work with at least one of the Python framework.

Familiarity With ORM Libraries: In general, the object-oriented programming language is mainly used for the conversion of data between that are incompatible. This technique is called Object Relational Mapper (ORM). From any type of coding or programming language, a virtual object database is built by object-relational mappers. developers also use various personalized ORM tools. Using and connecting applications via Object Relational Mapper such as Django ORM, SQLAlchemy, and so on. It is much faster, easier, and efficient than writing SQL-hence it is more preferred by the developer team. If the developer has this skill set, they can easily find job opportunities in the market.

Basic Understanding Of Front-end Technologies (HTML5, CSS3, JavaScript): More often a Python developer needs to work along with the frontend team to make a match the client-side with the server-side. Hence, it is essential that you understand how the frontend works, what is feasible and what is not, how the application is going to appear virtually. In a perfect agile software house, there is a UX team, Product manager, SCRUM master to co-ordinate seamless work-flow.  It doesn’t denote that a frontend is essential for Python developers but definitely, in some projects, this knowledge and experience is an additional skill set.

Python Libraries: Libraries turns the work of developer much easier, execute tasks faster, and maintain seamless workflow. Based on the project, it is essential to know the libraries which are going to complete your day-to-day activities. Python is an open-source and community-based programming language. Hence understanding Python libraries brings many benefits for you and your team.

Version Control: Changes in the source code happen many times and the developer needs to track every change. Keeping track of everyone’s changes happening or made to the file to later source the codes is essential for each developer. In most of the job offers requirements, you will see the version control skill as an important one. It is one of the important job requirements expected by any company. If you have enough exposure in the coding field, you will be familiar with version control. If a developer has perfectly set up thier GitHub, and they are used to words like “push, fork, pull, and commit” and track the changes in the code.

Al And Machine Learning: AI and Machine Learning are the constantly growing field. Python is the best programming language for both AI and Machine Learning. If you are interested in data science, then you can easily grasp the concept of machine learning and AI. Developer in data science needs to improve thier logical way of thinking. The developer needs to have good proficiency in machine learning algorithms. Individuals need to have a better understanding of data analysis, collection data from many resources, visualization of data, produce insight from data, and neural networks.

Communication Skills: In top software development firms the teams are made out of skilled programmers which work together to attain thier end goal.  In order to work efficiently in the team, the developer needs to communicate well. Communication is an important skill that one should have in any profession. Good communication can bring success to the organization. A person needs to avoid any communication gap or any kind of misunderstanding. When the communication is done properly, the developer can easily complete the task and interact with other team members.