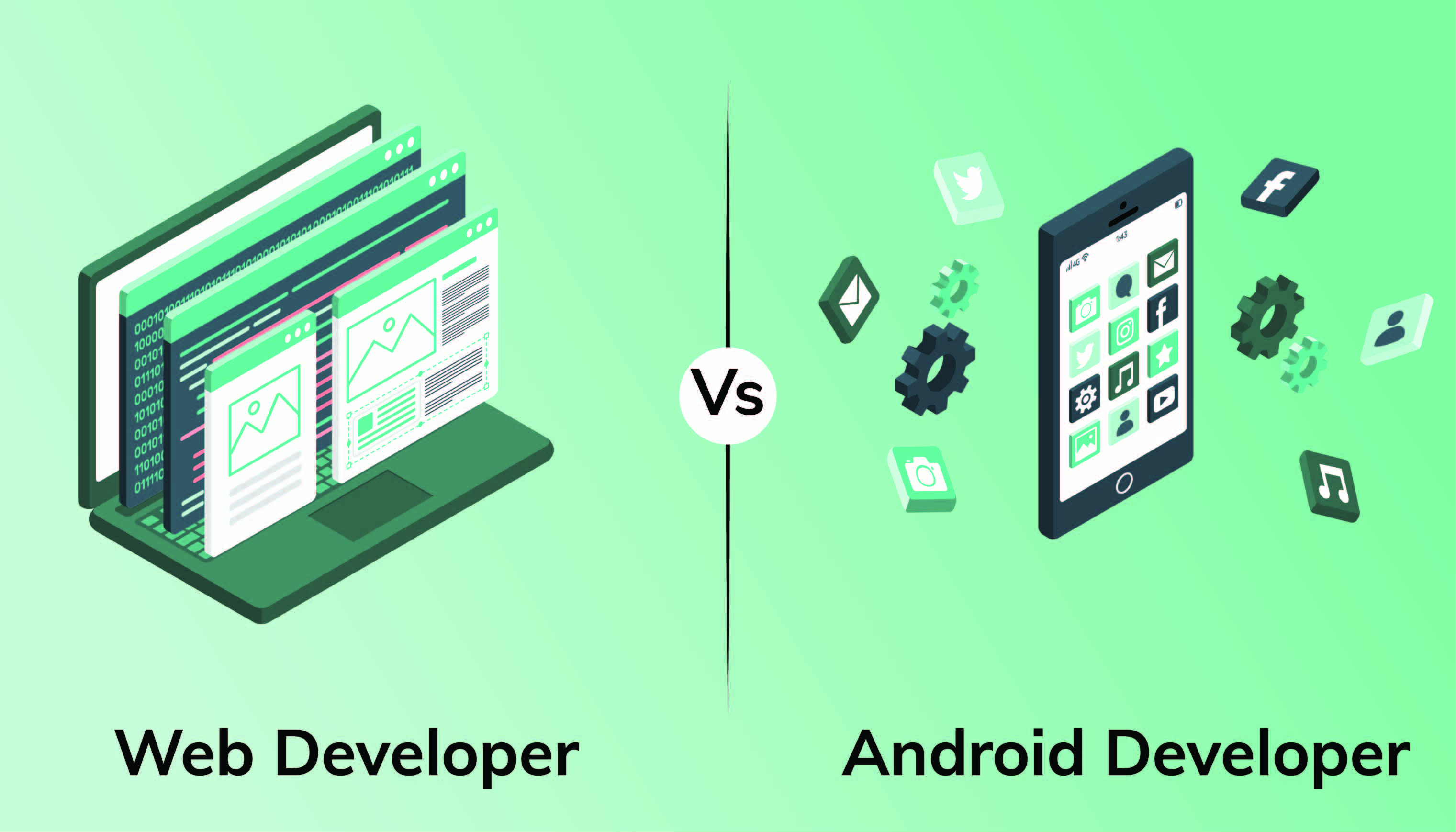 Android Developer VS Web Developer: Which Is The Best?

India is the 2nd highest mobile development jobs generating country (51% for Android developers and 49% for iOS). Worldwide there are about 9 million mobile app developers; and 4.41 million apps.

Do these numbers make yourself want to think of becoming a mobile developer (especially for android)? I would say why not? But, hold your horses, and take a look at the number below too.

Presently there are about 530 million active websites, and 23 million web developers doing the work.

Now what do you think about being a Web Developer? I would say again why not? By now surely you must have become more than a bit confused (which you already were). Well, the thing is that Web development and android Development while both require knowledge in coding, there are differences in the two with varying abilities, specifications, career scope, level of difficulty, salaries, specifications, market demand, etc. Lets’ try and understand these various differences so that you can make a choice easily – if you want an Android Developer Career or a career in Web Development. So,

What Is Web Development?

What Is Android Development?

Native android apps: These apps are developed by using the language supported by specific Operating System of the Android such as Java, Eclipse, etc.
HTML5 android apps: HTML5 apps can run on any platform i.e. android or iOS with minimum changes made to the coding done in CSS, HTML5, and JavaScript.
Hybrid apps: Hybrid apps are a combination of native mobile apps and web apps. Hence they are like websites, but work on mobile browsers i.e. they are apps in the native browser.

Web Development: Web development is comparatively easier. The major reason being that no matter what is the hardware or operating system used in the user hardware, the technicalities and hence, the skills required for development of websites and web applications are the same. Knowledge of Programming languages like HTML, CSS, and JavaScript is where you can start with. Thus, those with a background of Computer Science or IT will find it easy to learn these languages. Learning these languages is also not going to cost you too much. Also, today there are various CMS i.e. Content Management Platforms such as WordPress, Joomla, Squarespace, etc. for website development which are sought out and secure and will save you a lot of time and effort. Do note that back end development is a bit more difficult than front end.

Android Development: On the other hand, when it comes to android apps development, it is a bit difficult. This is because you need to learn skills specific for every platform – iOS or Android (here of course we are considering android) and also specific to the operating systems of Android/iOS. Thus, as an Android developer you will require coding knowledge of Java against Swift for iOS platform, which requires more coding. Also remember that so as to learn the programming language; you need to have the exact same device as well as the same Operating System. This means you will be spending a lot more in learning to become an android developer. You will need access to various android devices with various OS, and then only you can learn.

Web Development: When it comes to versatility, Web development wins it hands down. Once our learn one or many languages such as Java, JavaSscript, CSS, C#, C++, PHP, Python, Ruby, etc. you can then use your programming language and can work on the front end or back end, or even development of games, or even eCommerce websites development, etc. i.e. you can develop any type of application. This choice of a career as a Web Developer gives you high flexibility to try what you want, and you can choose a job which is your calling
Android Development: With Android Development, the level of flexibility is less as compared to Web Development. As there is different skill set, technicalities, tools, etc. required for different platforms as well as different Operating Systems, you don’t get much options available to you as an Android Developer. If you are specialized in an OS on android platform, you can develop apps for that only. Of Course it remains that you learn programming for different OS on Android, however, still there is much less flexibility.

Web Development: Businesses today are increasingly moving online. Especially within the post COVID world, due to social distancing, virtual presence is gaining more influence. Also, highly competitive niches too are on a look out to go online through their own websites. Same goes for ecommerce websites. With increasing customers looking for online shopping, online store fronts are increasingly in demand so that the demand for website developers, ecommerce website developers, etc. are increasing. Good development skills will get you a decent job as front-end developer, for good management of website from back-end for maintaining their conditions too a back-end developer will be in demand. As a good developer you will be in demand for creating user centric websites which also create a brand image for businesses, and help them achieve high profits. And yes, your SEO knowledge will be required to build SEO friendly and highly responsive websites.

Android Development: Half of the internet access today is through mobile. Google too has gone mobile first understanding the growing usage of mobile phones. Figures also state that mobile users today are spending about 90% of their time on applications. Undoubtedly, the demand for android app developers is on a rise and Android Developer Career has a great scope.

Web Development: The average annual salary for Web Developers in India is about INR 3,08,040. Obviously the salary in India will be less, however with increasing demand, this career option gives a decent enough salary package. The location of your job, your prior experience, and your skills will affect your salary. For example, back-end development is difficult and will thus pay more than front end. Also, multinational companies and larger corporations will obviously offer better packages.

Now that you understand well the differences between these two careers, it should become easy for you to choose the right Development Career Option. If having more flexibility and more career options attract you, or higher salary? It’s your choice. So, what are you waiting for? Lock your option, and go for it.