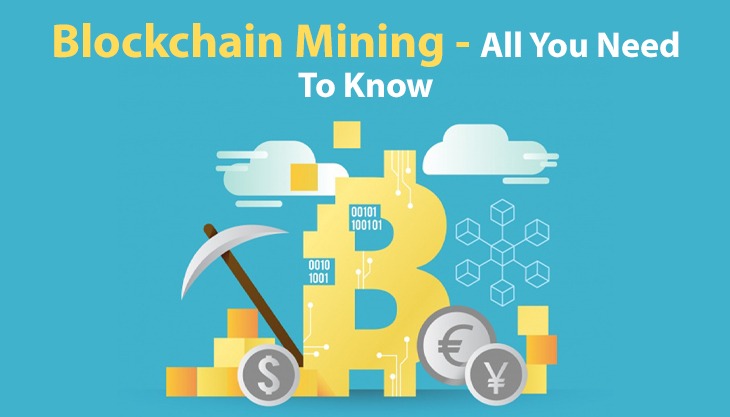 Blockchain Mining - All You Need To Know

What exactly is Blockchain Mining?

Blockchain mining is a peer-to-peer computer process to validate every step in the transactions while operating bitcoins or other cryptocurrencies and secure and verify bitcoin transactions.

Bitcoins have no central clearinghouse, and bitcoin transactions are verified in decentralized clearing systems. Many people contribute their computing resources to verify the same, and this process of verifying transactions is called mining.

Blockchain represents a specific code authentication encrypted on the network software in a clear and detailed manner. The primary motive behind blockchain mining is to authenticate the transfer of currency from a computer network to another.

Blockchain mining is the process of adding transaction records to the bitcoin blockchain, and a lot of computing power is consumed in the mining process of bitcoins.

A community of people worldwide performs blockchain mining, and anyone with a computer can become a Blockchain miner.

In Blockchain mining, millions of dollars process in bitcoin transactions, and since its launch in 2009, it has never experienced a downtown or has got hacked.

The process of mining bitcoins is rewarding, as well, and mining profits have been rock bottom in 2020. A single user does not handle the mining process, but many compete on a common platform to get the rewards in several bitcoins.

If you had purchased just one bitcoin block in 2010 and are still holding onto it in 2020, it would have been worth of $450 000. Early adopters of bitcoins used to earn 50 BTC in every 10 minutes, mining from their bedrooms. Still, now the circumstances have changed, where equipment is more readily available now, but can cost anywhere from a few hundred dollars up to about $25,000.

Your revenue from the mining has to outweigh the overall cost of your energy consumed plus the original investment into mining hardware purchased.

In 2020, one modern Bitcoin mining machine like the Whatsminer M20S generated around $8 in Bitcoin revenue every day.

It is believed that 144 blocks are mined per day on average, and there are 6.25 bitcoins per block, so the average amount of bitcoins mined every day is 900. And regardless of the miners, it takes 600 seconds to mine one bitcoin by consuming 72 Terawatts of energy using the ASIC miners.

Bitcoin mining began as a well-paid hobby for early adopters in 2009, but now the situation has changed. There are many factors to consider beforehand to become an efficient and competitive bitcoin miner.

How to start bitcoin mining?

Types of equipment are mining hardware that are specialized computers created solely for mining bitcoins. The more energy and more powerful your hardware is, the more profit you will make mining bitcoins.

They need to understand their breakeven price before making the fixed-cost purchases of the equipment and perform a mandatory checkup on factors like cost of power, efficiency, time, and bitcoin value.

However, if you are interested in mining bitcoins, here is a step-by-step summary of how to start bitcoin mining:

* The first step is to get a bitcoin mining rig, special hardware designated just for mining Bitcoins or other currencies.

* The second step is to set up a bitcoin wallet to receive your Bitcoins and manage your Bitcoin addresses. There are multiple wallets, such as straightforward online wallets, software wallets to most secure hardware wallets, and paper wallets, where each wallet has its pros and cons.

* The next step would be to join a mining pool by cooperation between various miners in the large mining farms worldwide.

* Now once you are in the mining pool next, you would like to get a mining program to run on the computer that will connect you to the blockchain and bitcoin network.

* Why are you waiting? Now you can start mining and earning Bitcoins!

Bitcoin miners receive bitcoins as a reward, and you can earn cryptocurrency without putting down money for it. But, you will either need a GPU (graphics processing unit) or an application-specific integrated circuit (ASIC) to start mining, which is very expensive.

There are many risks of mining, financial risk being the most common among all. So here is a piece of advice for you, if you want to mine profitably, keep track of the news from the crypto world because development goes ahead very fast, and it changes on a day-to-day basis.