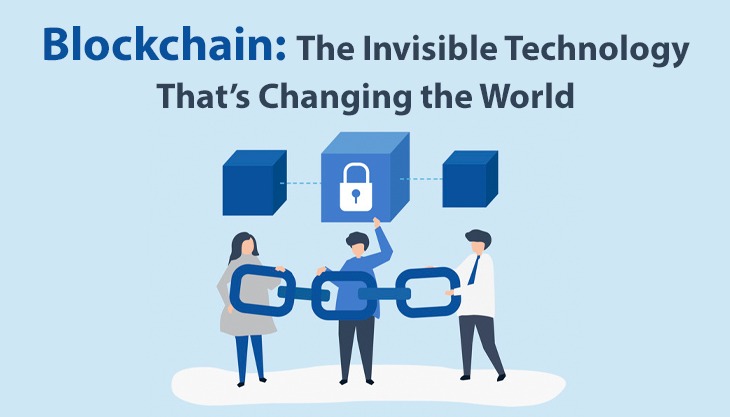 Blockchain is a special kind of database that collects information together in groups, also known as blocks, containing anything from Cryptos to voting records to medical data. The name blockchain comes from its structure, in which the blocks are chained together in a single list, called a chain.

A blockchain system is considered as a digital ledger of transactions. It is duplicated and distributed across whole computer system network. The information recorded by blockchain makes it difficult to change, hack, or cheat the system.

One of the more famous examples of Blockchain in action is Bitcoin Block contains information about the Sender, Receiver, number of bitcoins to be transferred.

Some famous use-cases of blockchain are in storing electronic medical records. It creates an open source blockchain database from where doctors can access patient information when they need it. Blockchain is used for tracking, agreements, and secure payment.

How is Blockchain changing the world?

Since blockchain technology can change almost every industry, it helps enable a more safe and secure way of the treaty by using its cutting edge technology, which has brought an enhanced level of transparency in the transactions process, resulting in trust between the customers and the financial Giants.

Adapting to blockchain technology has helped many fintech organizations support its benefits; as per the report by Business Insider Intelligence, around 58% of giant financial companies have admitted the impact of Blockchain technology on the fintech sector and believe it will grow in the coming years.

Blockchain provides end-to-end encryption of the end-user data along with the minimal risk of getting hacked. Using blockchain will reduce the overall expense and play a crucial role in altering the financial market in 2021.

Blockchain technology has the potential to change almost every industry out there to create a more efficient and prosperous world where people can connect without the need for intermediaries.

Many companies will utilize blockchain technology to provide more transparent, trustworthy, and efficient services to the end-user by sharing information that can help create trust among users.

It is believed that Blockchain technologies will boost the global economy by $1.76 trillion in the next ten years. It is no harm to say that blockchain will take over the world and the first sector to see the change in the financial industry.

Will Blockchain Succeed as a Trending technology in 2021?

Blockchain seems promising but going global and reaching everyone around the world is not easy. One of the biggest hurdles that can stop blockchain from being the next-generation technology that can change the world is governance, which can be a very tricky situation. As blockchain is in a stage where it is evolving rapidly, it can be used for many harmful things.

Although blockchain is considered one of the trending technology in 2021, many revolutions and research have just begun regarding this distributed technology as emerging technologies in today’s world.

Blockchain has emerged as a trending technology as it increases trust, security, transparency, and data traceability across a business network as there is no actual physical transfer of money.

Blockchain has many real-world applications across many industries, including identity management, smart contracts, supply chain analysis, and much more.

In a recent study, experts and researchers have found five factors to be the most dominant in deciding the applications and future of blockchain technology. These factors are Track, Trust, Traceability, Transparency, And Real-Time, so now is the time to see if blockchain will emerge as the most exciting and trending technology in the world or it fails to stand on its feet.

Now that you have understood blockchain and how blockchain is changing the world, we can use blockchain to directly change the world and your business.

Do let us know in the comments what your thoughts are on the future of the blockchain.