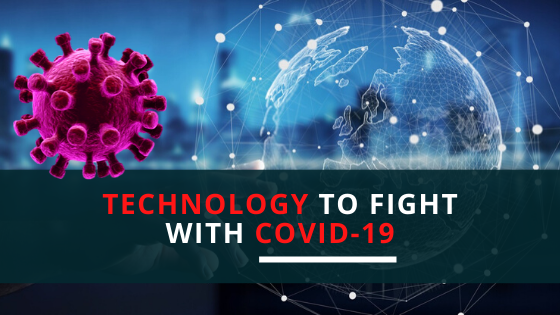 How Countries Are Using Technology To Fight With Covid-19

Corona Update – 2.79 Million confirmed cases of COVID-19 across the globe.

The new corona virus COVID-19 is a name which has singularly been able to strike terror in the hearts of people all around the world.

On 30th January 2020 WHO had declared the new Corona virus as an International Public Health Emergency. Since then, it has been a long struggle of survival, fighting deaths, avoiding the spread, facing unemployment, etc. And the fight will still continue for much longer time with great health, environmental, mental, financial repercussions. Such a large number of deaths and destructive aftermath were probably last seen at the World War II.

As social distancing is the most important measure to minimise the spread of COVID-19, technology has made this possible. It is can no more a physical world, but there is a need for a virtual one. The fight is of Technology against coronavirus. The question is whether technology can win.

Various countries all over the world are making Use of technology to combat Covid-19 crisis. Let’s take a look at the technology being utilized globally for fighting COVID-19.

Satellite Services: Satellite services have enabled nations to know how far and in what regions the virus has spread i.e. the latest Corona Update. And also it lets the nations know if a COVID-19 infected person is nearby. Location tracking is made possible with the help of satellite services which enables governments of the various countries to track people’s location from their smart phones. In this way, it is useful to identify all the places an infected person had been to before he was quarantined, and how many people he was in contact with. Many countries are using this technology to keep track of corona infected people, however, many European countries have stricter data protection laws and hence are unable to make use of this technology. Satellite Services are used to give out real-time information throughout the countries and are being used in plying the essential goods at a faster pace by tracking them.

Mobile Applications: A number of countries including UK, South Korea, Hong Kong, Singapore, China, India, have launched mobile applications which can be downloaded by people. People can use this app to report their symptoms. These applications have the location data from all the infected people’s smart phones, so that people will know when there is an infected person nearby with the help of location and Bluetooth features in their mobile. China has even developed a colour-coded health rating system which assigns three different colours to people based on their history of travel and medical history. The colour code was used to determine if the person should be allowed to go out in public places or to be quarantined. A mobile application enables the authorities to keep track of the movements of the people and the colour code assigned to them by tracking their mobile phones. Those who have green colour code assigned to them are the only ones allowed outside.

Drones: China is making great use of drones to combat COVID-19. The Chinese Police are using drones to monitor public areas. Drones fitted with cameras having attached facial recognition system are also being used. Thus, if citizens venture out without wearing masks, the drones are able to recognize and thus they broadcast warning messages to citizens to directing them to return home with the help of speakers attached to the drones. They even have used Drones to transport medical equipments. Agricultural drones are utilized in countryside regions a so as to spray disinfectants.

Robots: Singapore and China are using robots for hospitals providing quarantine facilities. Robots are being deployed to disinfect wards, and clean hospitals so as to prevent risk of healthcare works contracting the virus. China has cleverly made use of robots which dispense hand sanitizers to the public, sprays disinfectants, and even transports medical equipments and samples. Robots are thus used to reach even the remotest and highly infected areas of China. Also, the Wuhan hospital which was the epicentre of the outbreak of COVID-19, was entirely replaced by robot staff. These robots do all the jobs such as screening the patients, taking their temperature, and preparing their meal, etc.

CCTV: CCTV Cameras are being used globally to track all the places that an infected person had visited before he/she was detected to be Corona positive and quarantined. Thus, CCTVs help in tracking down people who could have been possibly infected from the already infected person. Not only that, they are being used to keep surveillance on people, thus ensuring that quarantined people don’t venture out. China is even utilizing CCTVs having facial recognition system, so as to monitor if the people venturing out – without or without masks.

Thermal Cameras: Within China, Cameras detecting infrared temperatures i.e. Thermal Camers are also being used. A Railway Station in China’s Beijing has camera with infrared system which is AI powered and has the capacity to detect 200 peoples body temperature within a minute. These thermal cameras are AI powered, and can identify people having fever from a crowd. Hence, people who may have had been infected could thus be identified.

The Data Technology: Within many countries, there is a Centralised Database, which is recording all the details including the smart phone location data, travel history, body temperatures, etc. This is done in countries which give comparatively less importance to privacy of individual data. After all, desperate situations call for desperate measures. Also, the world is focusing on research to come up with a vaccine for COVID-19. Also, data analytics is helping medical professionals to understand COVID-19. Thus, the technology is being used to predict the structure of COVID-19 virus which has a single stranded RNA.

China is the place where all this began. And even though China was the source of COVID-19, considering the current Corona Update, China is much less affected than other European countries. The reason for this is none other than Use of technology to combat Covid-19.

If we are to consider the various technology which are being utilized by numerous countries in the world, software plays an important role. Various software system and even Artificial intelligence is being utilized. This is the time when we are able to notice the need of Software service providers such as Techasoft. Undoubtedly, this huge pandemic has brought us much more nearer to technology, and technology has brought us together as humans, albeit not physically, but at least mentally.