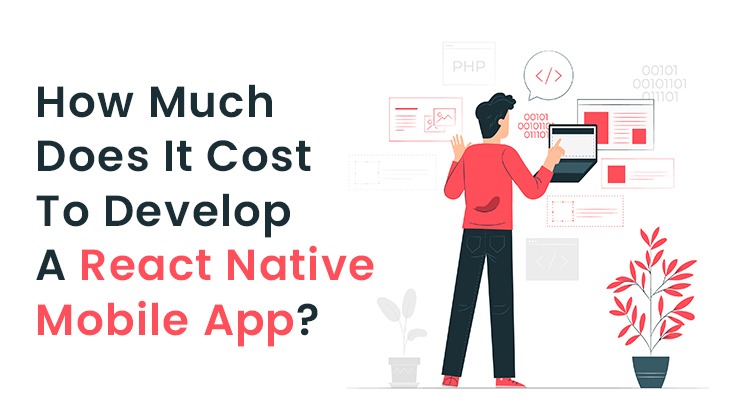 How Much Does It Cost To Develop A React Native Mobile App?

Looking over the growth of technological advancement, building any application within a smaller budget has become easier. A maximum of entrepreneurs is looking for answers to make an app at a low cost. And as an expected answer we are suggesting ‘React Native’ as the best mobile app development framework to build mobile applications at minimum cost.

Since Facebook has debuted in the market of application development frameworks, React Native’s popularity reached its peak because of its advanced and wide range of tools and widgets. Even some of the giant companies such as Skype, uber, Tesla seemed to choose React Native as a framework for building their applications.

Now if you have already decided to build an app with react native then you must know about the cost. And this article will tell you about the estimated cost to develop a react native mobile app.

Well, in India it costs around $15 to $25 to build a mobile app using react-native. But the cost varies depending on various aspects such as complexity, Authorization, design, features, maintenance, location, and more. Let’s have a wide look over such cost-deciding factors.

It depends upon how much you want to make your application complex by adding advanced features, designs, and more. There are various levels of complexity. The major factors of complexity include-

* Deployment of architecture mode: In this case of backend development there are two alternatives available-

With Baas, you can have access to ready-made backend architecture and with customization; users can customize their architecture. Thus it increases the complexity level.

* Development of admin panel: adding this panel allows entrepreneurs to monitor every activity and update according to that. These features add an extra level to complexity.

All these factors play a vital role in deciding the complexity level of your app. The more you add the features, the more cost gains.

The category is a major deciding component of cost. If you are trying to build an app with the least features such as a calculator app or an alarm app then your costing won’t increase as these apps don’t require much complexity. But if you are going to make an advanced featured e-commerce application then costing will be increased according to its high complexity.

If you want to make your app a bit more user-friendly then it must require features like user authorization which will allow users to log in. And adding this feature will likely cost much higher than a usual simple application with no user authorization feature.

“Look doesn’t matter” but in this case looks matter. If you want to attract more users to install your app then you must design it well. That design might include animation, logos, and transitions, and so on. Thus beautifying your app will expectedly raise the cost to develop a React Native app. Still considering the fact that React Native costs much less to design than other app development frameworks.

The costing limit doesn’t end at the launching of an app. You must keep in mind that an application needs timely up-gradation to hold a standard position and impression among users.

And individually all these processes will cost nearly 20% of your estimated app-building cost.

If you are willing to make a customer-oriented app you might want to link the application with various other social media platforms or come up with other add-ons for this. All these add-ons are going to increase the cost to develop a React Native mobile app.

Besides these, various other factors decide the total cost of developing a React Native mobile application. React native is much preferable not because of its low costing but also for its flexibility which saves a lot of time for developing an app and moreover it offers easy migration, community support and more. Besides, if you just don’t want to stand in the middle of these complications you can simply hire developers from mobile app development company like Techasoft. Know details here.