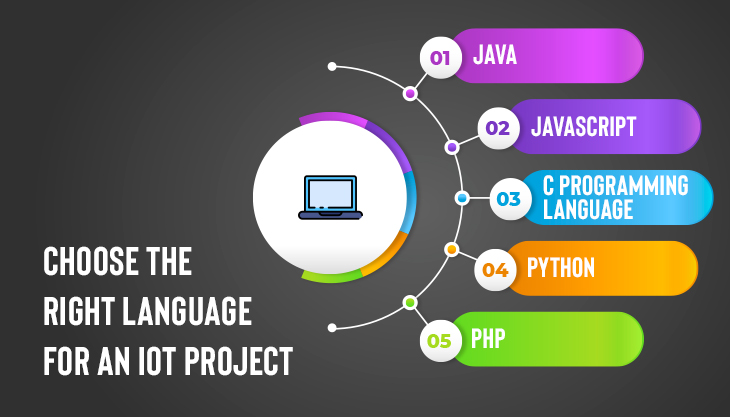 How To Choose The Right Language For An IoT Project?

It is 2020 today, and the world has around 30 billion IoT connected Devices up and running. That makes for about 4 times the world population. And if you are thinking that’s too many, well, the number is constantly on the rise. The reason is simple; IoT or Internet of Things makes our everyday lives – including home and offices and travel – everything smart. Right from the clothes on you to the watch on your hand, to the light switch in your room, everything can be IoT based.

What Exactly Is IoT?

Basically IoT Devices are that which you usually don’t expect to have an internet connect such as PC or smart phone; but they are connected to the internet and then share data among themselves. IoT Smart devices provide greater machine output with less human input and provide machine to machine interaction.

A simple example of application of IoT may be that smart watch you use. It can answer your calls; display your messages, etc. Also that smarphone speaker which can fetch you information, play music for you, even set reminder, etc. And what about that AC back at home which you can switch from your mobile phone so that the cooling is already by the time you reach back home? Also, that school bus in which you child goes to school, whose location you can know anytime on your mobile, you get the picture right? Do note that

As a Software Development Company or a Software Developer, building IoT projects is a part and parcel of the things. You can create a connected network of a number of devices/things/objects within which you embed sensors, actuators and smart software. Your IoT network will leverage big data, mobile, and cloud technologies; low cost computing, and data analytics too. For building an IoT Project, from among others, your major concern would be about the right Programming Language for your IoT Project. Here is our list of the ones which are the best for IoT projects.

Java is a well known and well preferred; in fact, it was the most popular Programming Language in 2019. It is versatile and it is flexible, which makes it the first choice for your IoT Project. As developers, you can code using java on your desktop. The Java Virtual Machine i.e. JVM enables you to transfer your code to any devices, smaller machines, and even any chip. In short, Java allows for good portability too. Thus, IoT devices with Java embedded into it are more capable to exchange and use data. And well, as the language is around for a number of years now, finding solutions to any problems of issues you come across is rather easy to find answer for.

JavaScript is nother one of the most popular Programming Languages out there as it is used in all HTML and web browsers. It has modality which is event driven and thus is efficient for setting up sensors which are important for IoT Projects. JavaScript makes devices interoperable and shares all its libraries with other languages. It is good to work within a range of environments, gateways and cloud. And yes, it is omnipresent too so that it can be run from anywhere. And the best part, it offers great support for developers as it has a great community.

Many Coding languages have been inspired by C and it still remains one of the most popular languages for Software developers. In fact, it ranked 2nd in 2019. C requires less computing/process power, has constrained pRAM and is easily available on most of the embedded system platforms. Also it lets you bend codes according to your need and offers for portability so that you can write your code on a system, and run it on any other.

Python is a Programming Language which is perfect for developments which are data intensive and thus perfect for developing IoT projects whose crux is exchange of data. Python has a various code libraries which are inbuilt and can be downloaded which can be employed to interface with sensors which you‘ll be using on your IoT Smart device.

PHP is a free, very popular, operative, and flexible server-side Programming Language. It has an integrated database MySQL which is open-source. PHP can be run on any major platforms and thus enables coordination of sites at different stages. The best part is that PHP is a blessing to developers as it provides great number of learning resources.

These are some of the Languages you can choose for your IoT Project. There are other choices such as Swift, Rust,  C++, Go, Parasail, Assembley, etc. Finally the call is yours to choose the right language; however do make sure that you use one which you are well versed with.