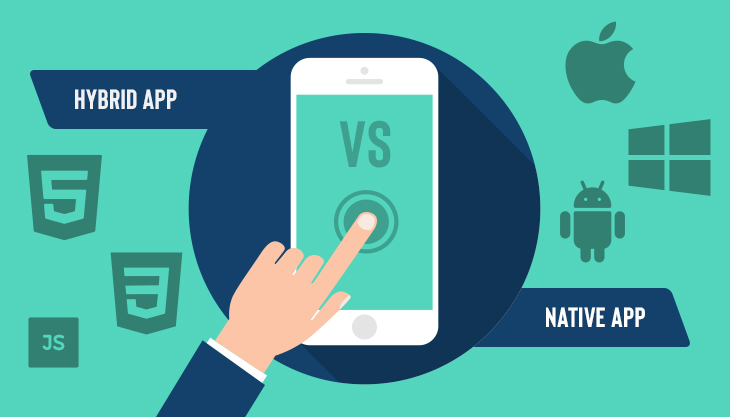 Hybrid VS Native App: Which One To Choose For Your Business

Did you know that of all the digital media usage, mobile apps account for an astounding 57%? Actually, this number shouldn’t even come as a surprise; after all there are 2.7 billion Smartphone users in the world today. As a business, you are sure to have noticed the increasing mobile and consecutively mobile app usage, and you must have finally reached a conclusion – you need a Mobile App For Business. By mobile applications here, we mean applications which are available in Google Play or iOS App Store, and which users can download from there. While Android users are way more than iOS users, the decision on which device you want your Mobile App to run on should depend upon your targeted audience, or you may want it to run across both the devices. And if you think know what your choice is, you are going to face another choice when you decide upon Mobile App Development. The question is whether you should go for Native App or Hybrid App.

Hybrid VS Native App is a debate which has been in the software development circle since long. And while there has been no ultimate winner, both come with their own sets of advantages and disadvantages, and the ultimate decision is depended upon the timeline, features, budget that you want for want. An informed choice is always better than guessed choice. So, today we are going to cover the basics of Native applications and Hybrid applications, so that you can decide what do you want to go for.

What Is Native App?

If you are asked to list a few mobile apps, most of them will be Native Applications, and that’s because most apps present in your mobile as a user are Native Applications. WhatsApp, Facebook, Google Maps, etc. are a few examples of them. They are distributed through app stores.

What Is Hybrid App?

Native mobile apps are present on the mobile and are interactive; while web apps can be accessed through internet like websites and have functionality like an app. Hybrid App is a combination of both. They like native apps can be downloaded from an app store and are present on your mobile; however they depend on a web browser embedded within the app. They are developed using JavaScript, HTML, and CSS programming languages.

Native apps are faster than Hybrid Apps and offer for more roboust and responsive user experience.

Native Apps have efficient coding which gives them complete access to device hardware unlike Hybrid Apps which have limited access. They also have access to built-in functionalities which are native to the device.

They provide fast graphics; fluid animation; and features such as double tap, gestures, multi touch, etc. It is great in terms of features and the feel.

Native apps are user-friendly, and can work even if there is no internet connection available as opposed to Hybrid Apps.

Native apps can make use of push notifications which is an important aspect for Mobile App For Business as it encourages users to take action towards specific goals, which in turn assists in achieving your business goals.

While Native apps are accessible over a single platform i.e. Android or iOS, Hybrid Apps allows for cross-platform portability.

Hybrid Apps can be developed rather quicker as it uses standard web technologies for Mobile App Development. Thus, while its responsiveness may not be as quick as Native Apps, its development is quicker and requires comparatively lesser time

There is a need to develop completely new code if you wish to develop a native android app for another platform. Hybrid Apps however have a single code base, which with some minor changes here and there is re-usable and will get you access across any platform.

The cost, is one important aspect of a Hybrid App the over Native app. It is less expensive unlike Native Apps which are costlier.

Hybrid VS Native App: Which One To Choose For Your Business?

Now that you know what advantages and disadvantages both the types of mobile apps hold over each other, you should be able to look beyond this debate of Hybrid VS Native App and make a choice. As mentioned earlier, remember that the final choice is yours – we merely help you to make your informed choice. Carefully understand the above mentioned information, digest it, see which is applicable for you, and choose one which fits the bill of your business goals and expectations and of course budget. Best of luck with your Mobile App.