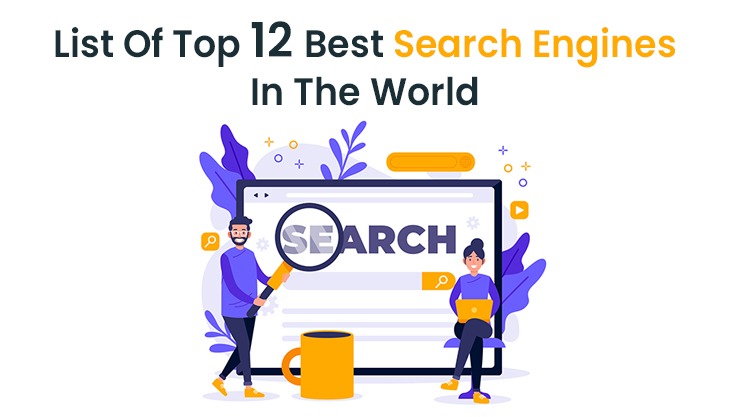 List Of Top 12 Best Search Engines In The World

We can only imagine the high reliability that people have in Google as a Search Engines. It is so much so that even the term “to Google” has been added to the dictionary and it is equivalent to “to Search”. No wonder then that Google dominates the search engine market with a market share as high as 92%. However, there is still the remaining 8% that constitutes other Best Search Engines in The World. If you are an online business, it becomes imperative that you optimize your website and its content.

While you may think that most of the consumers use Google Search Engine, it is considered so on a global scale. On the other hand, some Search Engines are more preferred in a specific region, for example, Baidu in China, Yandex in Russia, Naver in South Korea, etc. Thus, businesses based in these regions and those who wish to appear in the local searches in those locations need to be aware of all these Search Engines. Similarly, some Search Engines (of course other than Google) cater to a different segment of the market. Those businesses which are relevant to such target markets should also optimize for these Search Engine.

So, here’s a list of the very top 12 search engines all around the World, for which you can optimize your online business.

List of Top 12 Best Search Engines in The World:

1) Google: Google ranks number one in the Top Best Search Engines in the world and handles around 3-5 billion searches every day. As stated before, it has a huge market share of the Search Engines is also the globally most visited website. Google was launched about 24 years back in 1997 and has grown today tremendously and available all around the world in around 149 languages. This fully automated Search Engine is written n C, C++, and Python and provides search results based on a rank system i.e. “PageRank”. Since 2012, Google has also introduced ‘Google Voice Search’ for spoken search. Google makes use of ‘Web Crawlers’ software and crawls the internet to find sites that are then indexed and ranked and accordingly appear in the search results. The results are determined by Google’s search engine algorithm and it continuously improves itself to provide the audience the best and the most relevant results.

2) Bing: Bing is the second numbered among the Best Search Engines in The World with a market share of around 2.3%. Sure, it is far off from Google’s market share but is still a viable option to consider. Similar to Google, and owned by Microsoft, Bing has an algorithm that provides search results after crawling, indexing, and ranking. However, do understand that the search result for Google and Bing differ. Also, in a few aspects, it can be considered to be better such as the Image search of Bing. Its image search results are better organized and more advanced in image search. If Optimizing for Bing, be mindful that it gives more importance to the quality content rather than links. While YouTube is owned by Google, Bing’s video search fairly displays video results from YouTube, also the results are displayed in thumbnail grids and searchers can watch them on the Search Engine’s Result Page itself. With such performance, Bing is being increasingly favored in the United States and accounts for more than 6% of the US’s search engine market share.

3) Yahoo!: Yahoo! search engine was launched 2 years before Google in 1995. Previously, Yahoo Search provided results to queries and was run under the Yahoo! brand. This searchable index originally didn’t itself do the crawling and data housing. Later on, Yahoo Search was powered by Inktomi and even by Google. Post which, Yahoo! finally became independent (between 2004 till 2009). Finally Yahoo! made a deal with Microsoft and now, Bing (that is powered by Microsoft), powers Yahoo! Search. Today Yahoo! has about 1.5% share of the search engine market, falling on the third number.

4) Baidu: Baidu is the Google alternative in China, having a much as 63.56% of China’s search engine market share. In China, Baidu hence beats other Chinese search Engines like Shenma, Sogou, etc., and even Google. Only Alibaba is another website giving a bit of fight to Baidu that too only for product-related search. Baidu being able to become the top search engine in China is mainly because the Chinese Government has put a Great Firewall i.e. an indefinite blockade on all of Google’s services. Baidu was founded by Robin Li who had initially come up with an algorithm RankDex that is similar to the PageRank of Google. It can be noted that the patent for the ‘PageRank’ algorithm was acquired nearly 2 years after the ‘RankDex’ came up, indicating that Google’s PageRank’s idea had originated from RankDex.

5) Yandex: Way before Google or Yahoo, Yandex was founded by Arkady Borkovsky & Arkady Volozh. It was originally named ‘Yet Another Indexer which then became ‘Yandex’. Not only was Yandex founded before other top search engines, but it was also even the first to sell Ads on their Search Engine and monetizing it. Yandex.ru gives tough competition to Google in Russia so that Google and Yandex both have somewhat equal market shares (between 45-50% each).

6) DuckDuckGo: DuckDuckGo was established comparatively recently in 2008 by Gabriel Weinberg. What makes it to be included in the Top Best Search Engines is the fact that this is a go-to search engine for those who are conscious about their data privacy. As you know, Google is well known for giving a personalized search experience. However, this is possible because it takes advantage of the user data. DuckDuckGo, on the other hand, doesn’t collect the user’s data. Thus, its search is not personalized and is the same for anyone searching. This search engine has its Web crawler but also uses various algorithms like the Bing, Yandex, Yahoo! Search, etc. to provide search results without compromising the user’s privacy.

8) Ask.com: Ask.com is a Search Engine founded by David Warthen & Garret Gruner in 1995-96. The search results of Ask are based on the concept of question and answer web format. The distinguishing fact about Ask is that its users can see the preview of the web page even before clicking on it. The search engine integrates huge archive data and thus answers the questions asked by the users. Also, whenever they don’t have an answer for a specific question in their archive, they then take the help of other search engines to provide answers.

9) WolframAlpha: Launched in 2009, Wolfram Alpha is one of the Best Search Engines in The World that can distinguish itself because it is a Computational Knowledge Search Engine. Thus, For any search queries, it displays result in the form of facts and data instead of a list of web pages or documents. They even provide a paid pro-solution for Educators & Students. The focus on making all systematic knowledge computable and accessible. For the right market, it is a useful search engine.

10) Naver: Founded in 1999, Naver is a Search engine developed from a South Korean online platform. Referred to as Google of South Korea, Naver has been the 1st operator that introduced comprehensive search features like compiling the results through different categories and then listing them all within a single page. Today Naver also provides email, news, and Q&A platform services.

11) CC Search: Established in 2001 CC Search is a Search Engine by Creative Commons. Its license was launched in 2002 and all its index content falls under the Creative Commons licenses. They have presently included only images in their index. Thus, making it an ideal search engine for those searchers who wish to use the images from the internet, without facing a copyright claim. This is possible because CC makes licences millions of times to help creators share their creative knowledge. The results from CC Search are drawn from Thingiverse, Flickr, Behance, etc. sites.

12) Amazon: Amazon started as an eCommerce website selling books online. It expanded further, including various products, and now is used as a search engine by those users who wish to make a purchase. Based on the speed at which products are sold, Amazon’s algorithm i.e. A9 derives the search results for the searches. Amazon makes for a great product search alternative for Google. No wonder then, that Amazon is about to surpass even Google when it comes to being the most used Search engine for product searches.

So, this was our list of the Top Best Search Engines that are out there in the world which you as a business can explore and optimize for.