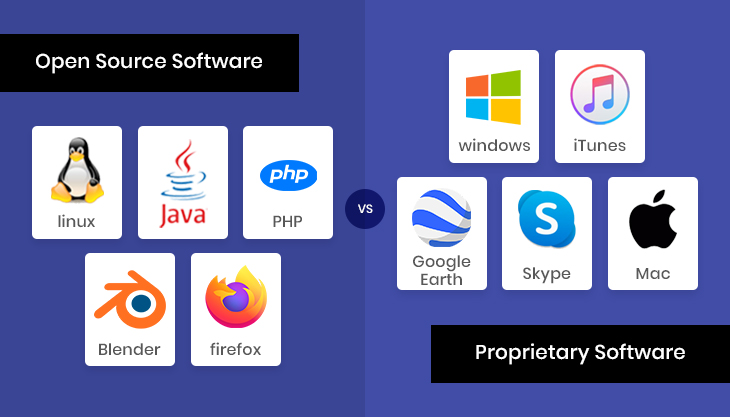 ‘Open Source Software Vs Closed Source i.e. Proprietary Software’. This has been a rather open topic of debate within the Software industry. Which one is better then? I have been asked this question a lot of times, so here I am trying to reach a conclusion for you. To glean which one is important, it becomes necessary to first and foremost understand what both of them mean to developers, vendors, as well as user. So, we’ll first understand what they stand for, what are their differences and similarities, and pros and cons. Let’s start from the start.

A software is a set of instructions i.e. programs, and procedures which instruct the computer about what work to do. The basis of these programs is a command text with long and complicated instructions called as the source code.

What Is A Source Code?

The source code is used by a programmer to specify what actions he/she wants a computer to perform. It is a collection of files or declarations or statements written in any programming language which are in human-readable form. The source code is then either converted into computer-executable form using a complier, or is implemented using an interpreter.

Depending upon the accessibility of the source code of software, it is distinguished as Open Source Software and Proprietary Software.

What Is Open Source Software?

In 1983, started the free software movement, which catapulted to open-source software movement. The notion of the movement was open-source collaboration where software was developed as well as tested by open collaboration. This type of software was termed as the ‘Open Source Software’ in 1998. Here the people working on the software voluntarily share their source code in the open i.e. without restrictions. Thus, the programmers and developers release the software under open licenses category. It allows anyone access so that they can study, modify, and even distribute the source code.

What Is Proprietary Software?

The software in which the owner of the software i.e. the individual/organization which develops it holds the exclusive right of the source code is the Proprietary Software. Thus, the source code of the Proprietary Software is the legal property of its owner and no one else is allowed to inspect, use, copy, modify, or distribute its modified versions.

Proprietary software refers to the software which is solely owned by the individual or publisher who developed it.

* Anyone with required knowledge can have access to, and modify the source code. Thus, the control is much flexible.

* The chances are that the software has source code modified by more than one individual; each having their own terms and conditions. Rarely having any formal or commercial support, and sometimes using generic drivers, this software is comparatively less secure.

* In the Open Source Software, the various people develop and modify the software so that the end users whom they target are of a large scale. There are even chances that the end users are well skilled in programming and developing too.

*There are no viewing and modifying restrictions of the source code, so that fixing bugs becomes faster, with less complexities. There is complete transparency with the internal structure having open-access and the users can suggest any modifications, and can even make them if they are knowledgeable enough.

* Here every one has the right to remove, modify, or change any features of the software. However, the users will have access to the un-modified software too. Thus, they have the rights to decide if they want to use the software with modifications or not or with which modifications they are made.

* Only the owner of the software can have access to, and modify the source code. Thus, the control is restricted.

* The software has only a single developer and modifier. Also, it has commercial and closed group support. Thus, there is lesser risk and it is more secure, with chances of better performance.

* In the Proprietary software, the end users are a limited group which are targeted and for whom the software is developed. Also the end users here have limited skills, the programming people are not going to look at it as the source code is open.

* With the viewing restrictions of the source code, fixing the bug becomes difficult. Also there is no transparency as the internal structure is closed-accessed, and the users are unable to suggest any changes or modifications to be made.

* They have the right to remove, modify, or change any features of the software without any notification or warning. The users has no control over it whether they want the changes or not.

It is said every coin has two sides. While debates are open on Open Source Software Vs Proprietary Software, both have their pros and cons. Which software to develop is better determined depending upon the situation and the need. And no matter what software you need to get developed, ultimately approaching an expert Software Development Company and getting it to develop according to your need is the choice you need to make.