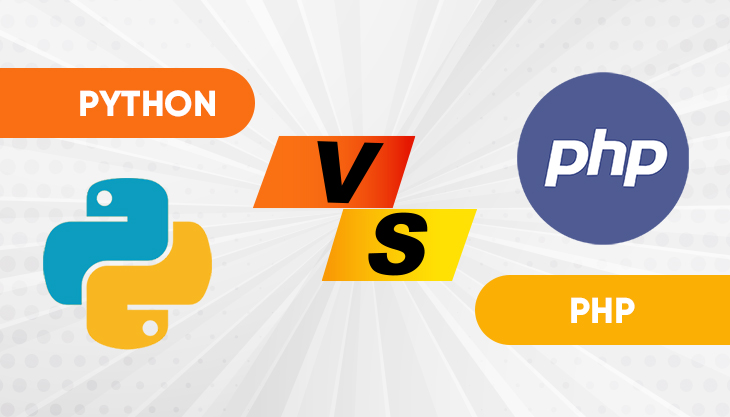 Python Vs PHP: What To Choose For Web Development?

Python is the preferred language by most of the developers, as the name implies its logo looks like snakes. It is used for creating dynamic page content and it can open, read, write, open, and close files on the server. It can also be used for database management to add, modify, delete data in the database. It was introduced in 1991 and it is widely used in the area of web development, app development, and system scripting. This language is easy to code because its syntax is similar to the English language.

It was introduced by Rasmus Lerdorf in 1995 and it is the most popular programming language across the globe. PHP means personal home page tools and it can run on a variety of platforms like Windows, Unix, Linux, Mac OS X. it supports a wide range of database and it is an open-source programming language which can be downloaded freely in the digital medium. It has predefined error reporting constants to generate an error notice

What is the difference between Python and PHP?

The main difference between Python and PHP is that Python is a general-purpose programming language and PHP is used for website development.

The Use Of PHP And Python

PHP is mainly used for app development while the Python is used is for a variety of purposes and can be used for creating things other than web solutions. The large and popular websites are powered by both Python and PHP, for example, Python powered websites are Google, YouTube, Dropbox, and more. The websites powered by PHP are Facebook, Wikipedia, twitter.

PHP vs Python – Factors To Consider For Choice Of Language For Web Development.

The programming language used for developing a website should encompass several aspects during the development phase. The important features are

Choice Of Frameworks And CMS

The framework is a set of libraries that are used in the creation of software solutions. Community support and available modules can help web developers to develop a unique web application. so, choose the perfect language according to your need and requirement. Python is a high-level and object-oriented programming language, and it provides a powerful framework such as Flask and Django. On the other hand, PHP language has numerous libraries and frameworks and they build mobile applications at a faster rate. The most popular frameworks for PHP are  Laravel and Symfony.

CMS is nothing but a content management system that allows you to publish and manage your website. PHP-based CMS are multipurpose and comprehensive, even a beginner in programming can able to handle it perfectly. It enables you to manage your portal seamlessly without any difficulties. Example of PHP-based CMS re WordPress, magneto, etc. while Python-based CMS functionality is limited and the common examples are Oscar and cartridge.

Without any further thinking, Python is the much easier language to learn and it is a general-purpose language hence it can be learned very quickly. Python programs are very short and crisp as compared to other languages. The syntax of Python is very simple and the code is readable. On the other hand, PHP is a general-purpose programming language and it is designed specifically for web applications, but PHP is a little bit tough to learn for beginners.

Python and PHP have excellent community support. PHP is the most preferred language for developing web applications hence there is a huge community of PHP developers that is ready to provide support. Python language has also the same level of popularity as PHP and there is a huge percentage of python developers in the market who are continuously building python applications.

Extensive documentation is available for both PHP and Python. There are countless innumerable websites, discussion boards, forums that offer extraordinary tutorials available on the internet for both programming language. Both languages have equal documentation availability.

Most of the framework is not free and it will not be fit for an organization that runs on a low budget. Python and PHP are open source tools hence it is free and a Large number of tech companies like to use open-source coding rather than paid ones but enterprises like banks, insurance companies like to use paid systems in order to protect privacy.