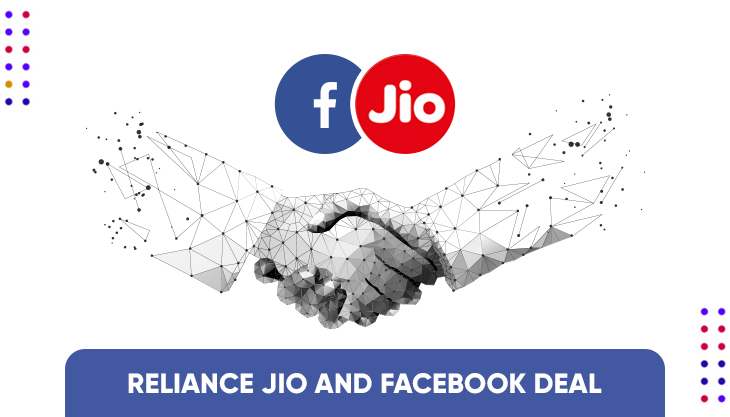 Reasons Why Facebook Choose Reliance Jio For Its Indian Investments

Facebook made an announcement that they are going to spend  $5.7 billion for a 9.99 percent stake in the subsidiary company of India’s Reliance industries. This is the first single largest investment in Jio in the history of Facebook. Facebook is the largest social media company by making investments in Jio. It has turned to Jio as the bigger competition to e-commerce platforms such as Google, Amazon, and Flipkart. Reliance Jio and Facebook Deal have made Mukesh Ambani take on Asia's richest man Jack Ma and a certain amount of the investment is used by Jio for building its e-commerce network. It is expected that the market opportunities for an online business are going to touch  $200 billion by 2028 from $30 billion in 2018. Reliance Jio and Facebook Deal will make Jio as the fifth-largest firm in India. This partnership will help reliance and Facebook to occupy the first place in Indian digital payments space by taking over the big giants such as Google pay, Amazon pay, Paytm, and Walmart. The social network Facebook and WhatsApp are used by millions of Indian users, and the subsidiary of Facebook company WhatsApp has tried to launch its digital payment services for small groceries, it is expected that the notification will be rolled out soon. Jio is the biggest data platform in India and this investment has made India a most favorable destination of foreign investments.

This investment was made due to India's tremendously growing, attractive, and large digital market. This agreement will boost the overall health of the digital and telecom sectors and this plan created a big revolution in the cellular service. Over the past few years, India has been undergoing a huge digital transformation.

These Are The Reasons Why Facebook Choose Reliance Jio

Reliance Jio had announced its 4G plans in September 2016, which had turned a simple telecom operator to a big data provider and this plan catches the heart of 300 million Indian customers. After the launch of Jio cinema, digital movie platforms like Hotstar, Amazon, and Netflix have been established.

Combination with Facebook makes Jio the stronger firm and the mixing of WhatsApp with Jiomart has made a revolution in the grocery store. Reliance Jio and Facebook offer consumers the ability to access the nearest grocery store after transaction through JioMart.

In the near future, JioMart and WhatsApp will create new employment opportunities and the small grocery store can grow their business to a huge level. This method of selling groceries in digital platforms is called phygital commerce and this method works when s customer wants to order a product from the nearest shop and they can simply send a message through WhatsApp.  This is gonna create problems for platforms like Amazon and Flipkart.

The Facebook investment of Jio is a safe bet for avoiding future problems that may have happened due to rules and regulations followed by the Indian authorities. It is not easy for a foreign company to access the sensitive data of Indian citizens and organizations hence they tie-up with the Indian company Jio. Zuckerberg bought the 10 percent in Jio as protection in the future and when they have help from a local company then they can easily start its payment service via Whatsapp in India.

The main aim of Ambani is to become net-debt free in the future which is not possible due to the delays in the Saudi Aramco agreement and the Brookfield agreement for selling its mobile network. From the investment of Facebook, it is expected that Jio will retain 15,000 crores for Jio mart and the rest will be used by RIL to lower debt. By this unexpected investment, RIL can become debt-free at the end of March 2021.

Facebook needs more data to withstand India's environment and so far the partnership made up Zuckerberg ends up in flopping hence it drives facebook to make an investment in India in the small and medium scale business. By now they openly said that there is no data sharing agreement within the company but it is expected that the announcement will roll out soon. The commercial agreement with Jiomart and WhatsApp can result in offering richer data to Facebook and this will monetize Jio’s subscriber base. By the end of this agreement, Facebook will get access to Jio's information and it is merely like working on the Instagram application.

This Investment Help Both Sides

Reliance is thinking to take on  Amazon in e-commerce, run a data center, providing fiber net and this investment can help Jio to set up new services like telehealth and distance learning. This also directly helps Jio to reduce the debt and increase the investment in further years.

This will accelerate India's push for ‘Digital India’, and this will help 30 million stores to transact digitally. This helps in both ways controlling the economy and driving the digital transformation. This also increases the users on Facebook due to the rise in the Tik Tok application because Facebook is now attempting to build a similar service like Tik Tok and the name of the service is called lasso. This encourages more users to come online.

This deal will encourage Jio to take a step from cellular internet service to a digital universe and the partnership with the biggest social media giant can help them to create a revolution in history. The investment of Facebook value is higher than the average enterprise value given to the company by top brokers like Citi Investment research, JP Morgan India, Kotak Institutional Equities, and Goldman Sachs India. These investments will help India to drive better in the race of digital India.