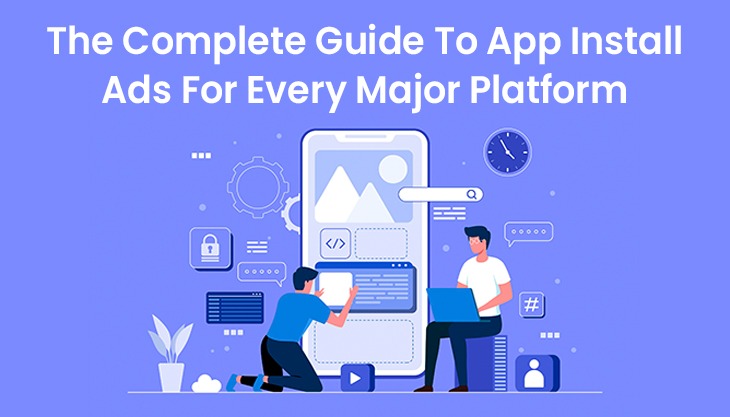 The Complete Guide To App Install Ads For Every Major Platform

App install campaigns present a bulk of downloads during a small period which eventually increases the app’s ranking rate in app stores. Organic traffic can also be made and this leads to more downloads and exposure. This Advertisement type consists of the app name, description, image, and a CTA button. However, additional features can be present depending on the platform. They are created to drive installs of mobile apps outside the app marketplaces from the sources. This usually appears in social media feeds, websites where the user is redirected to the app to download them.

Half of the top-grossing applications are done by Facebook mobile app install ads.

The reason why they are so powerful is because of their perfect target audience:

* Custom Audience targeting helps to reach users based on proper market segmentation, this includes specific demographics, interests, behaviours, and the usage of devices.

* By Facebook’s wealth of user data lookalike audiences of highest-value users can be processed.

* Campaigns such as re-arrangement can be set up to target the users again based on the previous actions taken place.

On Facebook, Instagram, Audience Network, Direct link to the App, Google Play, and Kindle Fire Store where the app can be downloaded, the ads can be showcased. Even Playable ads, which enable users to preview and play a game app before they install it:

When the trial game is done, the Call To Action (CTA) button directs the users to the App Store or Google Play Store where the full app can be downloaded. This method is extremely good since it is interactive. And the users have the option to try-before-you-buy video ad experience for higher-quality and higher-intent users to install apps.

This particular platform displays in the user’s home feed, it can be video or image format. It is termed as an “App Card”. This allows the device users to view an image, check the ratings of the app, and install or check an app.

Even if Facebook has a large number of users, Twitter has a great user base and advanced targeting methods to reach its right audience. It can target specific segments of demographics and audiences, or target the users again for appropriate marketing. The app campaigns work on a cost-per-app click pricing system, only pay for clicks is done which leads to the app stores or opening the app. This isn’t hard as 83% of Twitter users are on mobile.

They are termed Promoted App Pins and it is an effective way for Pinners to install the mobile app. It has more lifetime value since pinners spend more time and money on downloaded apps.

The two optimization objectives to be noted are:

* App Install Traffic: Advertisements run like the Cost Per Click (CPC) campaign, checking for click traffic. The bids can be adjusted manually to meet install goals.

Has a unique swipe-up feature that takes users directly to the app:

* Main benefit: Users are allowed to stay on Snapchat to download the app. It downloads in the background. In this way, they need not leave the app.

* A Deep-link attachment option is also offered mainly to re-engage previous users. If the app is already installed by the Snapchat users, the swipe-up action goes to a specific place. It could be a level in a game, a page in a shopping app, etc. If the user hasn’t bought anything, the Deep-link will also assist with influencing the user to purchase.

It is considered to be the largest search engine in the world. For reaching potential app users Google is the best choice. The ads can be placed on:

According to the Ad appearance, original content can be added, deleted, or modified. This is done for a great ad experience for the users. For Google, just set up the campaign, location, etc. Google will do the rest. For optimizing ads, Google uses a machine learning process based the performance while showcasing Search, Display, and YouTube Ads.

YouTube has 1 billion monthly active users. It is another platform for reaching the audience. It helps with the fast sharing of content. YouTube mobile app install ads consist of videos merged with Call To Action (CTA) that link the app.

* Market segmentation is an important factor again. Also, it is possible to connect the account with Google Play to analyse since YouTube is connected with Google.

The use of social media apps has created an extremely competitive marketplace. The number of available mobile apps available is 2.6 million in the Google Play Store and 2.2 million in the Apple App Store. Due to this, it is important to have a well-designed app. Even an effective way to market the app and create brand loyalty is important. This will lead to numerous numbers of downloads. The perfect way to do this is to add install ads on the application.