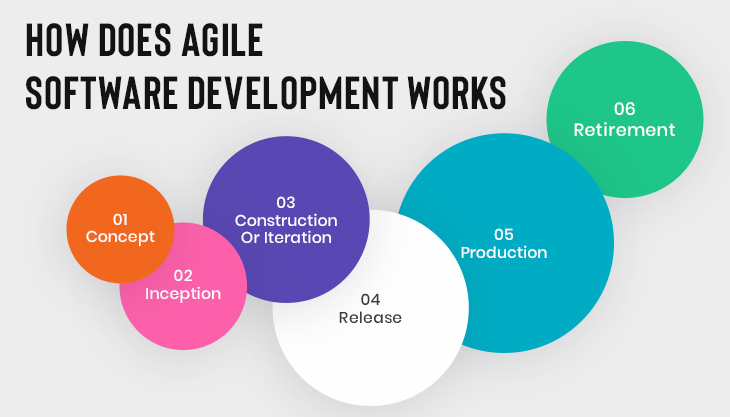 What Is Agile Software Development And How Does It Work?

In 2018, world had about 23 million software developers; and in 2019 it increased grew to about 26.5 million developers.

Software development is rather a budding industry today and has become a career option for millions of technologists.  With about 40 million people being doing some or the other kind of coding, today we are going to take a look at A model, a methodology, an approach, a process of software development i.e. ‘Agile Software Development’. The points we’ll be covering are –

A Software gives instructions to a computer through programming language of how it should work, thus allowing for interaction between humans and computer systems. Software Development is engineering as well as art in which software are developed. It is a process which includes all the activities required for designing, creating, testing, deploying, supporting, and maintaining individual software and all its components such as applications, frameworks, etc. There have been various methodologies and processes which have been utilized for software development within the past centuries since their introduction in 1935. Of the various Software Development Processes developed since then, we’ll be taking a look at ‘Agile Software Development Methodology’. Are you eager to know ‘What Is Agile Software?’ Well, we are going to talk all about Agile Today. But, first, let’s try to understand from where Agile is coming from.

Before Agile - The Waterfall Software Development:

Previously, in the 1970’s, there used to be a Software development process for developing software. This process was rather disciplined and traditional and focused on logical progression steps which were to be followed, namely – Requirement (gathering required documents), Design, Implementation, Verification (testing and debugging) , Release (publishing), Maintenance (support). These steps are cascading, similar to a waterfall and hence have been named as Waterfall Methodology. Waterfall methodology is rather too much disciplined, and while that is good approach in itself, there was a lack of flexibility. This approach is in use till the 2000’s. However, later on, there was introduced a more modern agile software development approach – “Agile Software Development”.

What Is Agile Software Development?

Agile Software Development is a blanket term and include various frameworks and methodologies, all of which are based on the beliefs and thoughts of the developers of how exactly a software should be developed, what should be their approach and process.

As explained above, a total of 17 rather experienced technologists came together with a view to find various ways of software development which were much better than those being used then. And then they prepared a ‘Manifesto for Agile Software Development’. The Manifesto consists of 4 Key Values and there are a total of 12 Principles on which these Values are based on.

The 4 Values which the Agile Manifesto follows are as below –

How Does Agile Development Work?

Agile Model of Software development focuses on continuous planning and learning, team collaborations and delivery in increments or sprints. This main aim is to adapt to changes, and deliver quick results. While, Agile does not follow the strict disciplined approach like the Waterfall Methodology, there is still flow or cycle which every Agile Method follows which includes –

In this first step, the business opportunities within the potential project are identified and prioritized. After that the requirement of work to be done along with the time required to complete it will be estimated.

In this second step, the funding is done, then the team members who will be working on it will be identified and assigned; and once the members are decided upon, the initial requirements will be discussed with everyone. Also, sprints – a period of time which is set for completion of specified work – will be made and then responsibilities of teams and team members will be defined.

In this third step, there is the start of development of the software – of course based on the feedback. Here, every iteration is considered a single cycle of development which is to be completed within few weeks. Each iteration builds upon the other and leads to the next step i.e. Release.

Here, after the development of all iterations, testing and debugging is done, and final iteration is released into production

In the production step, the software is kept running smoothly and the client is taught how to use it. Also, the support which is necessary for maintaining the software is provided continuously, and continues on till the product is to retire.

Here, after the development of all iterations, testing and debugging is done, and final iteration is released into production

This is the first and foremost of all the Benefits of Agile. Agile requires of all the participants of the development process – all the teams involved such as designing and development, the management, and even the clients – to be tuned in to each other throughout the process and to continuously adjust accordingly.

Traditional software development methods consisted of preparing a lot of documentations mentioning all the requirements, then finally getting to the designing and coding part, which was then tested and then delivered. Thus, it took longer to deliver the product. In comparison, Agile process divides the complete work into smaller increments or sprints which are tested while coding and thus the initial increment can be deployed within first few weeks to the client, and changes can be made accordingly and the further process would be carried out. The entire software also thus, can be developed faster.

In Agile Software Development approach, there are less of hard and fast, or strict rules set by the management, the employees are thus required to be agile and adapt to the changes. Also, there is a continuous ongoing process, thus employees can also learn from their mistakes on the go, and learn to adapt to them on their own too. This provides the employees with a great learning curve.

As it can be seen, Agile focuses on collaborations and interactions between the different teams of the project. There are to be meetings for all teams at every stage. Thus, there is no gap in communication between any team members so that the development process is on track and takes place seamlessly through any changes.

Traditional approach got the feedback from the client after the complete programming was done and is to be deployed. Agile process on the other hand gets continuous feedbacks, and adapt to any changes that the client suggest throughout the development process. Thus, while the development is done in smaller increments, the feedback is taken after every increment is delivered.

The Agile process develops in small sprints. Here, smaller portions are developed, tested, deployed, and taken feedback for. Thus there is a continuous testing followed by debugging. So that if there is a problem encountered within one sprint, other is not affected, and also, the errors are recognized initially only and be fixed then and there instead of being found out at the end.

Instead of following the rules dictated by the management to achieve the results that they want, the teams and team members of Agile process are self-organizing. Instead they understand what the clients want and are able to work in that aspect to deliver what the client is expecting from them. Thus, instead of too much documentation and unnecessary intervention, there is a transparency as the employees and clients are in sync.

In Agile, team efforts are required. Not only that, each and every member of the teams will be contributing to the development process. Of course this happens because of the process being developed in sprints. This also lets the employees take the responsibility for their works. While this is challenging, it sure lets the employees be more productive and satisfied too.

Thus, we can see that Agile methodology is beneficial to the developers as well as the Clients. It’s a win on win situation and an approach which will benefit all.

Client’s before hiring any Software or Application Development Company, will be doing research and then only decide upon their final choice. There are chances that the Agile Approach will be preferred by customers/ clients who wish for transparency, more involvement within the development process, and quicker result. On contrary, the clients which have a bit larger time and budget frame, and are sure of exactly what they want, and do not have time on had to be continuously involved with the development process will prefer Waterfall methodology of Software Development. And while these are preferences, remember that you don’t need to be strict about following either Waterfall methodology or Agile Methodology. Remember, that while Waterfall methodology is a definitive process, Agile is a thought, an approach, and you can include Agile approach with Waterfall methodology. Thus, as a Mobile App Development Company In Bangalore, when we are approached by a client for development of an Mobile App for their business; we prefer to work with combination of both the methodologies. As a software developer, you should try for the same and finally find a balance which will keep both you and the client satisfied.