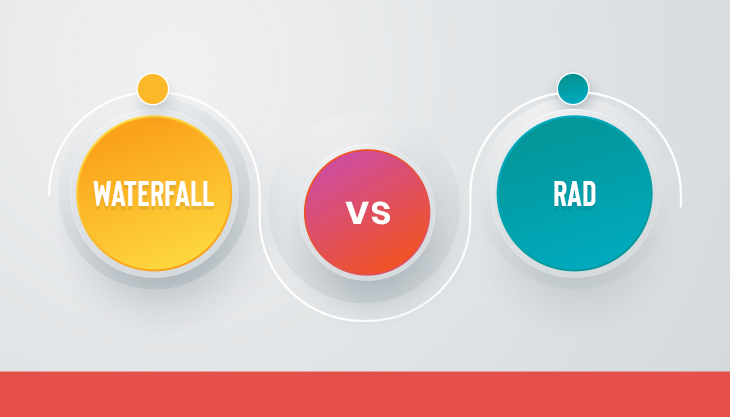 Which Methodology To Choose For Your Project: Waterfall Vs RAD?

“If we want users to like our software, we should design it to behave like a likeable person” – Alen Cooper

Bill Gates had stated that when it comes to Software Development, people assume that it is a rather solitary activity which is done sitting in an office behind closed doors and writing codes; however it is that and much more. It instead Software Development is a process which is a combination of art and engineering, a technical activity done with a human touch.

There are various methods of Developing Software, however, today we are going to take a look at the two of the most widespread methodologies which have significant prevalence in the software development field i.e. Waterfall vs. RAD i.e. Rapid Application Development.

What Is Waterfall Methodology?

Waterfall Methodology is software development process developed back in 1970, by Dr. Winston W. Royce. It is traditional and has a rather disciplined approach for software development which focuses on steps to be taken in a logical progression to develop software. The process follows cascading steps which flow down like a waterfall, and hence the name. Waterfall Methodology is rather easy to implement as it is a proper sequential process and implemented step by step. The steps include – Requirement i.e. the required documents are gathered, Design i.e. designing the software, Implementation, Verification i.e. testing and fixing the bugs, Release i.e. publishing of the software, Maintenance i.e. providing the support and maintenance.

What Is RAD Methodology?

RAD stands for Rapid Application Development and is a variety of Agile Development Methodology. It is the model in which a project is developed while giving importance to quick feedback driven changes i.e. user reviews are taken and the software is rapidly improved. Thus, the main goal here is to create product rather rapidly, but following customer input. RAD Methodology follows following steps – Do analysis and define the project requirements, build a Prototype, gather the feedback of users on the prototype, based on that refine and build your software, do testing, implement it and present a system.

Waterfall Vs. RAD: Which Methodology To choose

Now that you understand the approach of Waterfall Methodology as well as RAD Methodology, you may be wondering which one to choose for your project. Well, that depends upon what are the requirements of the project – If you know exactly what you want right from the beginning and if you only want to see the results; or if you want to keep a constant track of the development progress, etc.

Waterfall approach is rather strict where everything is planned right from costs to risks; while RAD approach is flexible and allows for continuous changes.

In Waterfall methodology, there is a clear structure, clear deadlines and clear results as planned. Whereas RAD methodology is rather open ended and is completed when the client is satisfied. In Waterfall approach, if after implementation, the client is satisfied, all is done and good in exactly stated time. But if the client is not satisfied and, there is a need of some significant changes to be made, it needs to start right from the beginning. On the other had in RAD approach, as changes are made rapidly according to the client feedback, and thus will finish early.

Waterfall model requires junior as well as senior developer. RAD model on the other hand needs a team of people who are experienced, flexible, as well as multi-talented.

In Waterfall methodology, costs are fixed in the planning itself and there will be no changes (increase) allowed. Thus, if you have a clear budget, you can go for it. In RAD methodology, the costs are rather variable and are allowed to change depending on the iterations and changes.

In Waterfall methodology, the process is planned, the results are estimated, and the risks are considered, all in advance. However, if something does not go according to plan, the risk is higher as changes made in later stages have some restrictions, and can even stretch time, cost, etc. Comparatively in RAD methodology, there is constant planning, change are continuously made as and if required, and everything can be corrected in lesser time, and hence the risk is low.

This is gives a clear comparison of Waterfall vs. RAD. This should be enough to let you know which methodology you would want to choose according to the requirement of your project. The final choice is always yours.