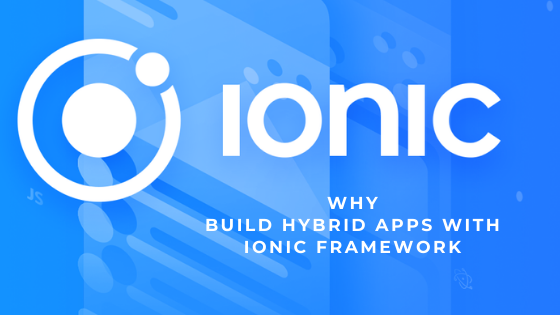 When the era of Smartphone arrived, it gave a boost to different applications for both Android and iOS systems. In those days mobile app development was in the evolving stage but it rapidly has grown in the last few years that today we are capable to reduce the size of any app. In that time devices should be compatible with the respective app to install in it but today almost all apps are available on the web and have similar access as we used in our devices.

These apps which can be either installed in your Smartphone's storage or you can simply add it to desktop on any web browser such as, Google Chrome, Safari, UC Browser, etc. are known as hybrid apps. Hybrid apps work faster and efficiently when built using the Ionic framework. Hybrid apps are a combination of native apps and web apps. To figure out more about the Ionic framework we need to dive deep into it.

Ionic is Framework an MIT-licensed open source UI tool used for creating high quality hybrid mobile applications. It can also be used as a Node module that helps in creating and packaging hybrid apps. Ionic framework can be integrated with AngularJS & Vue.java and use web technologies such as HTML, JavaScript and CSS to produce hybrid apps. Ionic mainly focuses on giving the same feel and exposure as we see in real mobile apps.

Hybrid app development can be done using an Ionic framework which allows you to change the user interface. You can write a code for your mobile and allocate it to multiple platforms. Techasoft is a prominent app developing organization that also offers hybrid app development, Software Testing, Digital marketing, and social media marketing at a cheap cost.

Hybrid app development many superb features which make it a decent effective choice to consider some of those are listed below.

Ionic framework makes apps easy to work and more convenient for those who are struggling with creating sufficient device storage. Developing hybrid apps with ionic framework attract many benefits some of which are listed below:

The platform is not bothered by hybrid apps as they are capable of handling multiple platforms such as web, Android/iOS/Windows app, etc. Ionic framework provides native look and feel on different operating systems.

Ionic Framework can allow you to shape your app according to your needs and demands. It contains CSS and JavaScript that hold basic things that every app must-have. For example tabs, caches, sliding menus, sliding boxes and much more.

You can use Ionic for easy documentation as most of the basic things are covered under the official site. It saves time of peeking into different sites and sources.

App developing can be performed through the Ionic framework in less time because you can simply run commands to create pages like ( ionic g page your_page_name) providers. You can easily generate multiple files with template codes.

If you have a basic idea of HTML, JavaScript and CSS then you can easily learn the ionic framework and will be able to develop hybrid apps.

Hybrid apps are a brilliant mixture of a native and web-based app. The usage of hybrid apps has become a trend followed by organizational sites to attract product seekers. Though it is limited to small size apps and cannot be converted to high-end graphics applications.

Its exposure and feel like an original application make it an appreciable choice for those have limited device storage. Both native and hybrid apps have their pros and cons it is up to you which side you prefer to fulfill your needs and requirements.