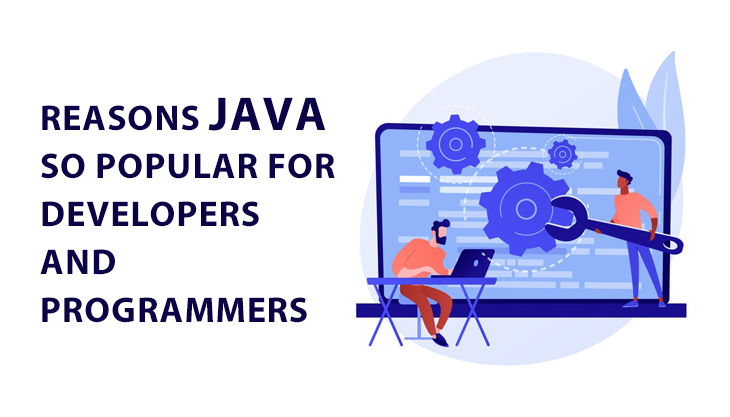 Why Is Java So Popular For Developers And Programmers?

Yes, Sun Microsystems had released Java as back as 1995 that was created by James Gosling et. al. After its release, Java slowly got a strong foothold and became the most preferred Programming language in the early 2000’s. Since then Java has prevailed in the field. In fact, it was 2019’s top programming language. So, what is it that makes Java so much loved and sought after for the past 20-25 years? Let us unfold the reasons and get at its roots.

What Is Java Programming Language?

In terms of programming language, Java for developers and programmers, was similar to C++, but with features that were more simplified and advanced. Thus, Java is –

Simplified: Java has been removed of all the various complexities such as operator loading, pointers, etc. which can be found on other programming languages.

Object-oriented: Java is Object-oriented and class-based. Everything in java is an object what has a particular behaviour or state, and java operations run using such objects. The object-oriented programming is further developed into class-based model. A class defines the structure as well as the behaviour of the object.

Concurrent: It allows execution of several statements, instead of having to execute it sequentially. You do not have to wait for all computations to be completed.

Multithreaded: Java Programs enables a simultaneous execution or performance of multitudes of tasks.

Platform Independent: “Write once, Run anywhere” or WORA is Java’s logic. Java compiled code can run across any platform/device/machine that supports java environment, using the JVM or Java Virtual Machine. Thus, Java is highly portable too.

Secured: Java develops systems and applications that are virus-free and un-tampered. Java compiler converts the compiled code into bytecode and runs them inside the sandbox.

Interpreted: On the other hand, JVM interprets the Java Byte code into native machine instructions.

Distributed: Java provides Remote Method Invocation or RMI feature that enables file access. Thus, RMI invokes the methods of other program from the internet or any other machine.

With so many features, Programmers and developers find Java Programming language useful across several industries, which are mentioned below.

Where is Java Used?

Java was initially designed for development of set-top boxes and hand held devices. However, over the time developers continuously updated it, increasing its use in various sectors including –

Stock market: Java applications are used to design stock market algorithms that tell you which stocks you can buy and not.

Science & Research: You need an application that is scalable, efficient, precise to deal with the large number of calculations and data which is a part of Science and Research findings. Thus, they are preferred to be build using Java.

Retail: When it comes to retail stores, Java Programming Language compiles all the billing applications used in there.

IT: When it comes to the IT domain, Java is required to develop several applications. This means that IT sector requires Java developers in large numbers.

IoT: Java is flexible, platform independent, highly flexible, and it has automatic up gradation ability that makes it an perfect choice for IoT systems. It also enables high integration in IoT devices.

With these and even other industries where Java is useful, Developers and programmers look forward to develop their careers in Java, as there is increasing demand for it. Where there is demand, there will be a supply. Other than this simple calculation of demand and supply,  Java is popular and top programming language, for developers for many other reasons, which we’ll understand further.

Why Java for developers and programmers is a popular Programming Language?

It is a User-Friendly language: There are two stages in Java learning – Core Java and Advance Java learning. In short, you have a simple learning path available for beginners. In addition, Java is easy to understand, learn, and remember because its syntax is in fluent English.

It has rich API: The Application Programming Interface of java is rich and extensive with hundreds of methods that developers can use in programs. The methods fulfil purposes such as networking, connecting to databases, dealing with input and output, etc.

It is Open-sourced: Java is an open-source programming language i.e. it is free to access and improve.

It comes with good documentation: Proper documentation is provided along with Java that explains all its features for the beginners. It also comes with guides which help with clarifications related to Java coding.

Top Industries love its compatibility: We have already mentioned about demand, however is need to be mentioned that industry giants in various sectors use Java as it is highly compatible with mobile phones, windows, Mac, Unix/Linux mainframe systems, etc. With these tech giants using Java, developers prefer to work with Java.

Understanding all the features and uses and perks of Java, it now should be clear to you why Java for developers and programmers is a lucrative career choice, and why it is so popular.