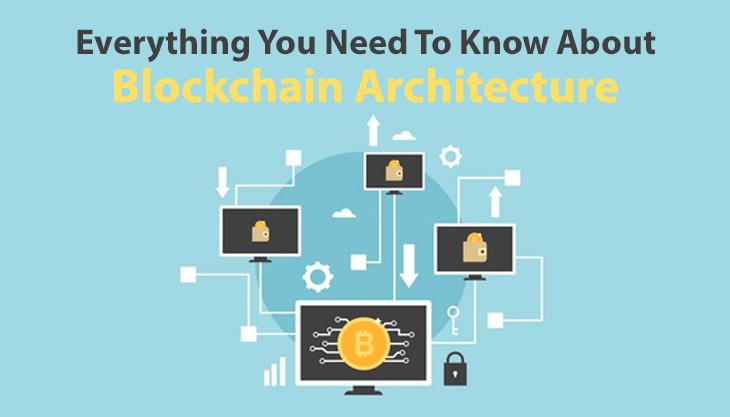 Everything You Need To Know About Blockchain Architecture

What is blockchain technology?

Blockchain is a series of segments that contain specific information securely and genuinely. The data is grouped in a peer-to-peer network similar to computers linked to each other instead of a central server. Hence, a blockchain network is designed as a decentralized network of millions of computers, commonly referred to as nodes.

Blockchain has a distributed database architecture. Each node(computer) is like a network administrator who voluntarily joins the network and allows digital information to be distributed, providing transparency, trust, and data security.

However, these days, Blockchain architecture is being used very broadly in the financial industry, mainly for creating solutions for cryptocurrencies and record keeping, digital notary, and smart contracts.

* Blockchain network refers to the infrastructure of application's placed within a particular environment inside one or a few organizations.

* Blockchain code refers to the tasks and goals blockchain has been developed to perform.

Some of the main components of a blockchain architecture layers are:

* A node is a computer in the blockchain architecture, and each node has an independent copy of the entire blockchain ledger.

* A transaction is a data record checked by blockchain members. That works as almost permanent proof of the authenticity of a financial transaction or agreement.

* A Block is a data structure used to keep a set of transactions and referred to as a sealed data compartment.

* A Chain is an ordered sequence of blocks in a specific order.

* A Miners is a specific node that validates blocks before adding anything to the blockchain structure.

* The consensus is a protocol, a set of rules and arrangements to carry out blockchain operations.

Let us see how a transaction process in different layers of Blockchain:

1) A transaction is requested

2) A block is built to represent a transaction

3) This block is assigned to every node in the network

6) The block adds up to this existing Blockchain

7) The transaction is complete

To summarize everything, blockchain architecture design is viewed from business, legal, and technical perspectives as a great solution to help enterprises to run daily operations more efficiently within a network of jointly admitting divisions.

Any delegates are prohibited from the blockchain ledger from a legal viewpoint, and any contact made within involved individuals only. It also guarantees control, security, and privacy of data inside the operation.

With its transparent mechanisms and supreme clarity, a blockchain architecture design helps transform the way individuals and organizations carry out transactions and deal with one another. It can assist organizations & companies in the subsequent courses:

* Chance to complete transactions much more swiftly and with confidence

* Expense rebate for companies or cross-enterprise processes while eliminating delegates, wastefulness, and duplications

* Foundation of the advanced digital interplay between entities

Here are some built-in features of reliable blockchain architecture to benefits businesses:

1) Cryptography - blockchain transactions are verified and reliable due to the complicated calculations and cryptographic evidence among concerned parties.

2) Immutability - any records created in a blockchain cannot be modified or removed.

3) Provenance - It is likely to determine the root of each transaction in the blockchain ledger.

4) Decentralization - Every segment of the blockchain structure can access the complete shared database. Unlike in a centralized method, a consensus algorithm is stable for network management.

5) Transparency - the blockchain system cannot be altered because it is not very sure to occur, as it needs enormous computing ability to overwrite the blockchain network exclusively.

6) Anonymity - Each member of the blockchain interface has a produced address to preserves the anonymity of users, especially in a public blockchain

Blockchains are incredibly popular nowadays, and the future looks bright for blockchain solutions. Blockchain technology will be widely adopted for the range of benefits it provides, so it becomes necessary to understand its architecture and components of blockchains.

In today's article, we discovered blockchain architecture, some components of its layers, its architectural design and critical characteristics of having a good architecture design for an organization.