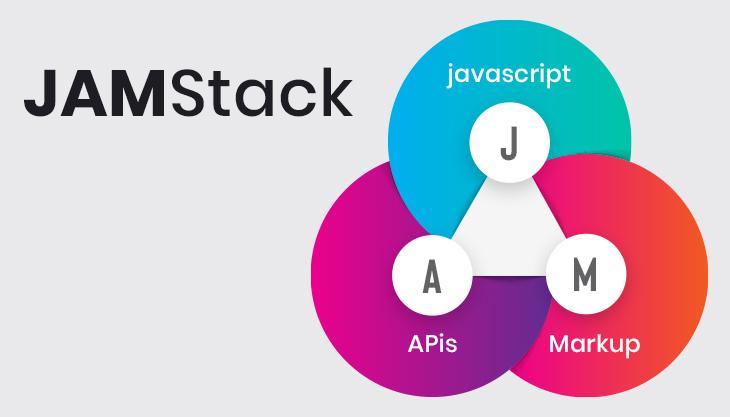 JAMstack is a web development architecture and it is not about specific technologies. It is an innovative way of developing websites and apps that offer better performance, lower cost of scaling, backend programming languages and better developer experience.  It is a modern web development architecture for building sites that can be served directly from a CDN based on client-side reusable APIs, JavaScript, and prebuilt Markup and it is the primary trend in web development coined by Mathias Beilman. In this article, we are going to see about Jamstack, explaining how to build a secure site using this architecture.

The main concept behind JAMstack is the usual static site generators. Solutions such as Jekyll have allowed content generators to avoid the need for managing costly servers and databases. They can publish their content as static HTML, CSS, and JavaScript directly through a CDN.

What Is the JAMstack?

The Jamstack is the web development architecture for creating faster and more secure websites. This site has a perfect toolset which helps to scale the website better and it is much easier to maintain & develop.

Let’s break up the term:

JavaScript is a scripting language introduced by Netscape in 1995 and it has progressive & reactive libraries, using that you can design web apps that work almost similar to mobile apps.

You can get help from a third-party for doing a number of tasks.

You can reuse components that are pre-built which is easier to maintain than the new one.

The Advantages Of Using JAMStack Architecture Are:

Pre-built files and assets are served directly from a CDN.

There is no requirement of databases and handle load balances because hosting static files is cheap.

The whole site content is static and it can be managed through version control, and it delivers.

The website build in this architecture has high protected security features.

CMS sites such as WordPress, Drupal, Typo3, Serendipity, Dotclear, and other traditional sites mostly depend on servers, plugins, and databases. But the JAMstack can load Javascript that receives data from an API, serving files from a CDN network.

It reduces the time of load with the help of pre-built files and assets served over a CDN. JAMstack sites load fast at a higher speed because the HTML is already generated during deploy time and it can be served via CDN without the involvement of any interference.

There are no security database or security breaches because everything works through an API. The server-side processes are integrated into microservice APIs hence the surface area attacks can be prevented.

JAMstack sites consist of files with small sizes that can be served anywhere and it much easier to scale when serving through CDN.

How do I Get Started?

Gatsby is preferred by developers to create fast websites and apps which is a free & open-source network based on React.

NuxtJS is the Vue.js Framework and it is used for building single-page applications, universal applications, progressive web apps, and desktop apps.

Hugo is the fastest framework for developing websites and it is the famous open-source static site generators. It can create the site at amazing speed and flexibility.

Netlify CMS is open-source content management that can be used with any static site generator for faster website building.

Svelte is a popular approach for building user interfaces. The traditional frameworks like React and Vue do the lack of their work in the browser.

JAMstack is the new approach of building apps and websites that offer higher security, lower cost of scaling, better developer experience, and better performance. JAMstack is based on a much looser set of services and libraries, which can make the starting stage of the transition more complex. The architecture of building apps is changing before it was called LAMP stack and then it was the MEAN stack. Now it is called JAMstack and it makes your work easier.