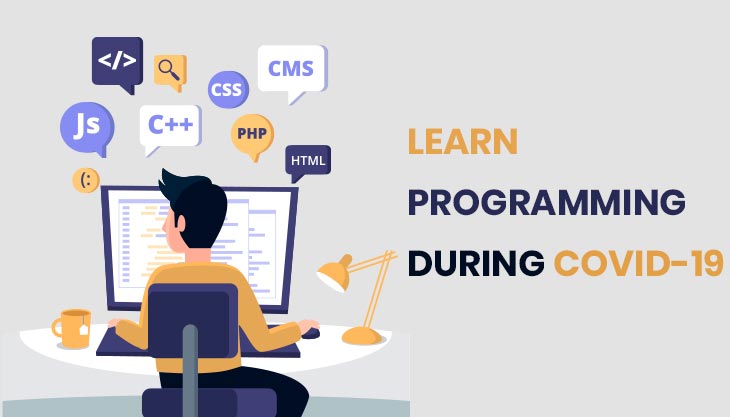 Due to coronavirus, everyone got trapped inside the home and several of them are working from home itself. It is a good situation for IT employees and the people who want to pursue their careers in the IT field because in order to survive in a competitive environment we have to learn new things. Learning During COVID-19 helps you to learn things that will help you to uplift in your carrier and use an online medium to learn the new programming languages. The best option to utilize time is Learning During COVID-19 which helps you to escape from the stress and at the same time you’re going to make your time productive. The below is the list of 10 Best Programming Languages to Learn During COVID-19

Javascript is one of the top programming languages preferred by most of the companies, just ahead of Java and python. It is not easy to see a software development project without a javascript and it is impossible to see a developer who did not use a javascript for building the application. It is lightweight, most popular which is always used for front end development and Java script is compatible with most of the browsers.

Kotlin is named as a first-class language by Google and it is best to use for android development. It is the best replacement for the most popular programming language java and this language is initially designed for Java Virtual Machine. It is an object-oriented, open-source, general-purpose language suitable for the development of Android and it is focused on clarity and tooling support. This open-source language originated at the JetBrain company in 2010.

Swift is an open-source, general-purpose and compiled language created by Apple Inc for building iOS and macOS applications. It was structured as a cordial language and it is extremely secure which is easy to read. This language is very easy to learn and anyone who masters other languages like java, python, javascript, and much more can easily move out to this language. It also has features such as module stability and it is influenced by ruby and python.

In the past 20 years, java is the most used language by most of the developers and its 99 percent object-oriented programming language. It uses automatic memory allocation and memory which makes it easier to run anywhere. You can code in all types of devices and can combine into low-level machine codes that can be executed on any platform using JVM due to its cross-platform compatible nature.

GO is also called Golang, is an open-source and procedural programming language built by Google. Most of the silicon valley companies prefer this programming language and it is the next demand to learn languages planned by many skilled developers. They are used to develop a core framework and the language is reliable which is easy to understand. This also supports environment adopting patterns and the programs are assembled using packages

R is a language and environment which provides a variety of types of statistical computing such as linear modeling, nonlinear modeling, clustering, and classification. It is similar to the Language S and environment for graphics. This language is available as free software in the source code form of FreeSoftware Foundation’s GNU General Public License and using this tool we can produce well-designed quality plots including mathematical operations. It is mostly used for machine learning and data science

Ruby was developed in 1990 in Japan, is an open-source, simple, productivity, and dynamic programming language. It is designed with the motive to simplify the programming environment. It became famous because of the full-stack framework called Ruby on Rails and it is a high-level language. It is not easy to maintain and you can develop an application with less line of code.

It is the best programming language of 2020 which can be directly embedded to HTML to create web applications and websites. At first, this language was created to maintain a personal home page (PHP), and later it is used to get data out of databases. PHP means general general-purpose programming language and it is a scripting language. It is a strong option for web developers due to its features and it is easy, simple, and cheap to setup which can be understood easily by new programmers.

It is the most complicated language of the C family but it is easy to learn and it does not compile into the assembly. The c- sharp is an object-oriented and powerful programming language created by Microsoft as a rival to java. The code is logical as compared to c++ which makes it easier to learn for the starters. It is famous for developing applications in VR, 2D, 3D gaming.