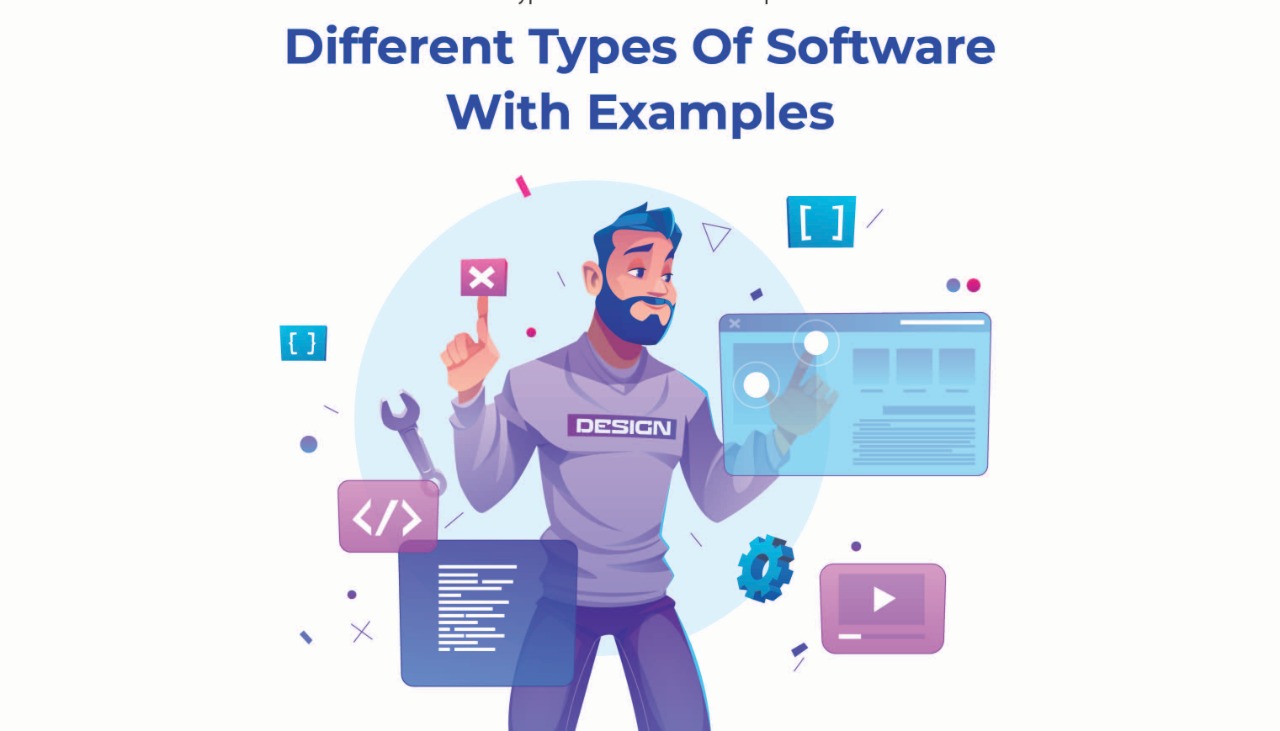 Different Types Of Software With Examples

There are more than 20 million software developers worldwide.

It is so because the software is made by people – with feelings & thinking – and with the purpose to provide simple solutions for complex problems. We come across (and use) one or many software daily. They have very much become a part of our life. Today, we are going to understand in detail what is software and what are Types of Software – along with examples. So, let’s get into the details.

Software or SW or S/W is a collection of predefined instructions, procedures, programs, data, documentation, etc. that a computer processes and performs accordingly. It is a set of codes that tells technological devices like tablets, computers, smartphones, etc. how to perform a task. And thus, it allows for the interaction between the computer and its user. To simply put, your computer would not be able to carry out its tasks without software.

Thus, software when coupled with other technological devices dictates our way of life. We can connect with people on the other side of the world, get answers to any queries within seconds, reach out for help in crises, and deliver to others in need right from our homes. All this is made possible due to software. Software hence is one form or other, one type or other, has become an essential part of our lives. To help you understand better, let us mention some of the very well-known software. Powerpoint, Google Chrome, Microsoft Word, VLC, Gmail, etc. are

To better understand them, we’ll delve into its types right away –

When it comes to software and software development, they are classified into two major types, namely – the System Software and the Application Software. We’ll understand them and also take a look at their subtypes.

Application Software – also known as end-user software or productivity programs – is the type of software that is developed with a specified purpose according to the requirement of the client. It is for improving the utility of computer systems.

The various features of Application Software include –

* Application software is helpful for the computer system but is not an absolute necessity. They can be installed as per the need of the user. It runs, starts, and stops when requested by the user.

* They are developed to performs tasks like processing, spreadsheet, email, etc. and thus are specific purpose software.

* It is an intermediate between the System Software and the end-user. Also, it has a user interface and hence has very frequent user interaction.

* High-level programming languages such as C++, Java, Python, etc. are used for writing the codes of Application Software, and the programming required for it is much simpler.

* Application Software runs on the platform that is created by System Software.

Now that you understand what Application Software is, let's take a look at its various types –

* Wordprocessing Software: They are utilized for documentation; and thus help with formatting, printing, as well as storing of the documents. Examples of word processors include MS Word, Google Docs, Apple iWork – Pages, etc.

* Sight & Sound i.e. Multimedia Software: This is the software that is used for purposes such as creating illustrations and liveliness, picture and video altering, etc. These types of software are very popular and can play and record sounds, videos, pictures, etc. Examples of Multimedia Software include VLC Media Player, Adobe Photoshop, Picasa, Windows Media Player, etc.

* Internet/Web Browsers: These are the types of software that are required to use the web i.e. they help the users to recover information that is present over the world wide web – hence the name web browsers. Examples of Internet Browsers include Google Chrome, Microsoft Internet Explorer, Mozilla Firefox, UC Browser, Safari, etc.

The System Software – also referred to as general-purpose software or low-level software – is the type that helps the hardware as well as the user to interact with each other and perform basic functionalities.

The various features of System Software include –

* The System Software helps the system to comprehend the user input command and provides other software a platform to work in. It is also helpful in computer hardware operation.

* Thus, it acts as an intermediate, providing an interface between the hardware and the Application software. while there is very less or no interaction with the end-user.

* In the System Software, a lower-level programming language is used for coding, due to its compatibility with the hardware.

* However, this programming language is much difficult to understand & manipulate, and thus, developing it will require some very skilled and experienced developers in place.

Now that you understand what a System Software is, let's take a look at its various types –

* Operating System: Any Device requires an Operating System for its basic functionality. The OS determines how the user can interact with the system. It provides the Graphical User Interface to the system that enables the performance of tasks and management of files and folders. Thus, for the basic functionality of any device, the Operating System is necessary. There are different types of OS including single-user, multi-user, real-time, mobile, internet, distributed, embedded, etc. Any user will pick one or another OS based upon the device and hardware. This is important because Operating System handles resources and other applications that run on it. Examples of Operating systems include MS Windows, Mac OS, Linux, Unix, iOS, Android, Ubuntu, etc. If you are a digital device user, you know that you’ll require an OS for your device.

* Device Drivers / Driver Software: A Device Driver controls the hardware that is attached or plugged into the device’s system. Examples of hardware that require device drivers include a printer, mouse, hard disk, display, sound card, etc. They are required because they assign duties and translate the commands of the Operating System for the attached hardware. With more than hundreds of attachable devices, device drivers easily facilitate the communication between system software and the devices with the use of a standardized language. Thus, for every plugged hardware, a minimum of one device driver is needed for them to function. On a positive note, for most of the devices, there are built-in default keyboard, mouse, and printer drivers. Some advanced devices may be exceptions and require external installing of the drivers. Do note that for different operating systems, different variants of drivers are supported. Thus, the drivers will need to be installed accordingly. Device Drivers are further divided into two types viz. User Device Drivers, and Kernel Device Drivers. Examples of Device drivers include Printer Driver, Sound Card Driver, Network Card Driver, Display Driver, ROM Driver, USB Driver, Motherboard Driver, VGA Driver, BIOS Driver, etc.

* Firmware: A Firmware is a set of instructions that are permanently embedded within the read-only memory of the hardware of the device. Thus, this is permanent software that provides information about how the device interacts with other various hardware. A Firmware software remains permanent until it gets updated by a firmware updater, then it can be considered ‘semi-permanent.’ Examples of firmware include Embedded Systems, ComputerPeripherals, Consumer Application, BIOS, UEFI.

I] Freeware: This is the software that is available for free and can be downloaded from the internet without the user having to pay anything. The drawback associated with this type is that users cannot modify this software type. Examples include Skype, Adobe Reader, Yahoo Messenger, etc.

II] Shareware: This is the software that is freely available for a limited time period and once the limit is expired, payment needs to be done for its use. Shareware can be of various types like Freemium, Adware, Demowre, Donationware, etc. Their examples include Adobe Acrobat, Winzip, PHP Debugger, etc.

III] Open-source Software: This is the software available – either free or chargeable – along with the source code and the user can freely modify it as well as distribute it. Examples include Mozilla Firefox, Thunderbird, Apache Web Server, etc.

IV] Closed-source: This is the software that is paid and has intellectual property rights on its source code.

So, these are the various Types of Software and their examples. This should be enough to help you understand their basic differences and to recognize them well.