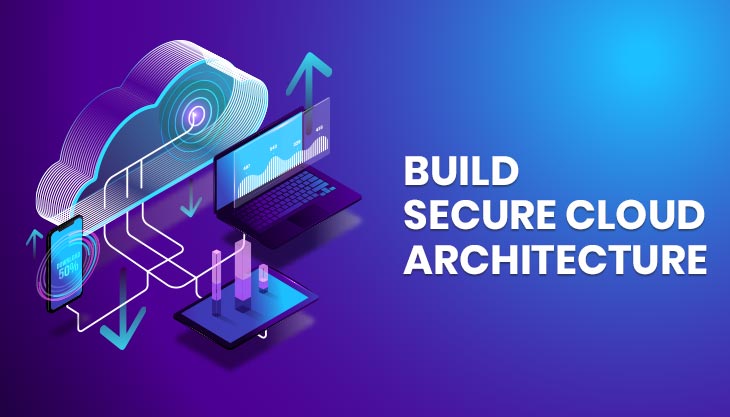 How To Build Your Secure Cloud Architecture?

Every one of us has somehow somewhere heard of a ‘Cloud’, actually we have even used it. However, if I were to ask you ‘Cloud’ what cloud exactly is, you might not have an exact answer. Because, a ‘Cloud’ like its name is rather elusive. It’s a congregation of many users just like how a cloud is accumulation of water particles, and it has no shape or size. It is not directly visible, however it just is.

If I were to define a ‘Cloud’ or ‘Cloud Computing’, it would be – ‘Cloud includes servers which can be used for Storing, Processing, Accessing, and Managing Data via the internet.’ So that when we say something is on the cloud, it means that it is stored onto internet servers instead’

Thus, if you are connected to internet, a cloud can be accessed at anytime and from anywhere.

If we were to put it in simple language, Cloud computing is like you are using someone else’s devices to store your data for your personal need on the internet. And you can access this data on the other’s device using the internet.

The relationship between these components is defined within Cloud Architecture

* PAAS or Platfrom as a Service: This is a development environment where users are provided with a web server, an application platform, an operating system, and a database; so that they can compile, build, and run their programs.

* IAAS or Infrastructure as a Service: Available on a pay per usage basis to the users; IAAS provides infrastructure including storage devices, networks, servers, etc.

* SAAS or Software as a Service: This service provides the users application software which can be maintained on internet itself and thus can be accessed from any platform. Thus, itdoes not require to install the software. It provides on-demand pay per use of application software. SAAS is frequently used by end customers. Gmail, Google Drive, etc. are example of SAAS.

These services are then deployed either through Public Cloud, Private Cloud, or Hybrid Cloud.

Security of a Cloud is of utmost importance and is an important consideration for any user, and rightly so. You can take a look at some of the examples such as a cyber attack on iCloud by Apple, where the private images of users were leaked publically. Even LinkedIn suffered from a cyber attach where around 6.5 Million usernames and passwords were hacked from databases. Thus, security of the cloud should be a top priority.

How to Build your Secure Cloud Architecture?

First and foremost, you need to decide upon a security approach which can work upon any compliance or data level security problems. This approach should be effectively applicable to the application that you will be building. The application that you build should include encryptions and reach the necessary level of security. It should be able to handle all kinds of sensitive data in myriad ways.

For this, your Cloud Architecture needs to build into your application architecture, a security which is systemic to the application. Identify and Access Management (IAM) can be incorporated within your cloud-based application. This will help you increase agility in configuration of security for the applications, and also reduce the cost for security. More than half of the present applications on the public cloud have already imbibed IAM and the new applications being built are following. While this is true, it is important to remember that while designing the IAM into cloud system, every business has its own needs and requirements which will be the final deciding parameters for the security.

When you build a Cloud Architecture, you need to keep into consideration the various traditional aspects such as the sound design, its testing, and improving accordingly. Also, new aspects should also be equally incorporated. Give priority to service orientation. It is possible that this may increase your cost and also the time required to build the application, however it is a great value for money as it makes your Cloud Architecture more secure. You can hence consider it as an investment.

Remember that building a Secure Cloud Architecture has no one formula and the process will vary according to the business to which it’ll be catering. You are free to make mistakes and then learn from them.

If your business has the required skill, follow the tips mentioned above, or else, you can outsource for your business a Cloud Architecture. As I say, the ultimate decision is yours – Money or time.