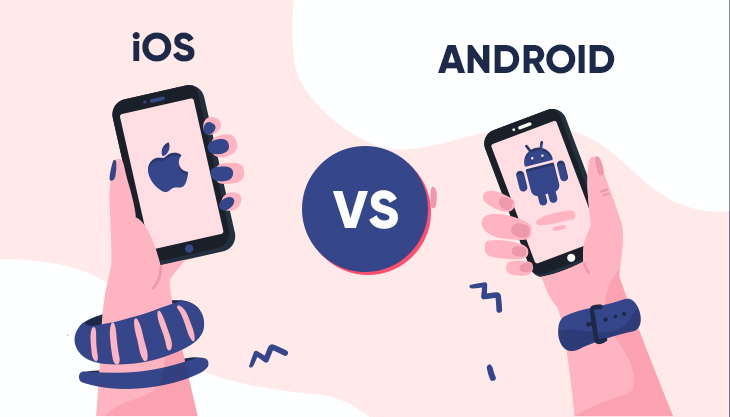 IOS vs Android: Which Should You Build Your Mobile App On First

If you’re building an app, the first decision you have to take is deciding whether to build an app for Android or iOS while your motive may be to launch an app on both platforms but it is very expensive to build an app for both iOS and Android simultaneously. You can choose the one depending on our needs and requirements, for example, a media company has a variety of audience groups and resources when compared to a start-up. Most developers choose to develop an app for one platform to start and later they lunch the App on another platform. Then launching the app on another platform when the first version of the App is successful. Selecting between the Apple app store and Google Play store is the toughest decision you should make while building a mobile app for most of the start-up companies. Both Android and iOS app users behave differently, if you launch the app on the wrong platform there is a chance that you can lose your potential customers. You already know that Android is the pioneer in the mobile operating system But in some Geographical areas, iOS device gets the first place.

The decision is based on several factors such as Audience, Timeline, Desired Features, Budget for maintaining your app, and revenue. This blog is about IOS vs Android: which platform is best

IOS vs Android: choose the one Depending on your audience

Android devices have the highest global market share compared to the iOS device but Apple dominates the App store for customer spending. To select your perfect iOS, you need to find out the end goal of your app and which type of audience is important to your business. Android apps get more download than iOS apps but the profit generated more is the iOS platform. You can choose the perfect one based on your target audience’s geographic and demographic characteristics.

If you’re targeting a wider Global audience, Android is your first choice and if your target audience Western Europe or North America. If you are an e-commerce app then you should go for Apple and it is the best option for an Audience in up-And-coming markets in the global areas like Asia, Africa, and Latin America. iOS is the first choice for Audiences in Western Europe, Australia, and North America.

Timeline plays a huge factor in determining which platform is best to develop for first. Building Android app consumer more time due to longer release cycles and device fragmentation, and developing an app that is compatible with multiple Android devices actually takes more time because there are thousands of Android devices which have different types of screen sizes and OS versions running. There is only a fewer iOS device than Android devices and building apps for the iOS device is quicker than building for Android devices

It is easier, faster and cheaper to build for iOS, the main reason for the lesser cost is it is very easy to code for iOS apps because Swift is the Apple’s official programming language while Java is the Android’s programming language and it involves complex coding, and android is one of the open-source platforms. Apple App Store has strict guidelines and quality standards, so it takes longer for apps to be approved. There is a chance that the Apps my even get rejected if it is not up to Apple’s standards

Building An App For Android Enables More Flexibility With Features.

Android is an open-source platform, hence there is more flexibility to customize your app based on your audience’s needs and requirements, Android platform is more susceptible to pirate apps and malware due to its open-source environment. iOS apps are more secure because of their closed nature hence there is a wider audience group in the enterprise market.

For building the Android app you need to spend more time ensuring that your app remains compatible with the platforms without bugs or crashes, many Android users are slower to adopt newer operating systems. Apple users will update their operating systems at a specified interval of time.

Monetization strategy plays a major role in choosing which platform to develop for first and coming for revenue, it’s a well-known fact that iOS app makes more profit, even with fewer users and lesser downloads. If you are thinking to monetize through a subscription model or in-app purchase, iOS is the best platform. On the other hand, Android apps tend to monetize with an ad-based model and Android users hardly spend money on apps than iOS users, hence free apps with in-app ads are more usual in the Android platform. The fact is that the Apple App store earns revenue twice as Google Play.

IOS vs Android: Select One Platform To Develop For First