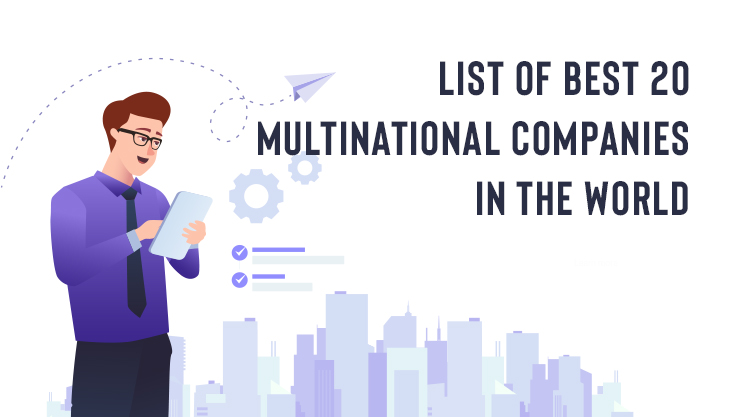 Multinational Companies make for a great workplace choice for job seekers. They have a good work environment, huge career opportunities, a steep learning curve, and large growth opportunities. We have got for you a list of the best MNCs to look forward to.

1) Microsoft: Considered one of the leading Multinational Companies founded in 1975 by Bill Gates and Paul Allen. This technology company develops consumer electronics, personal computers, computer software, and other related services. Many countries including the US, the UK, the UAE, Italy, Mexico, Poland, Denmark, Chile, Argentina, Brazil, Canada, Ireland, India, Germany, Belgium, Norway, Sweden, Spain, etc. claim that Microsoft is a great place to work. Microsoft thus makes for an MNC to work worldwide.

10) Mars: Mars is one of the leading Multinational Companies In the World. They are manufacturers of chocolates, mints, fruity confectionery, chewing gums, pet food, & other products; and they even provide animal care services. It was founded by Franklin Clarence Mars in 1911 and has headquarters in McLean, Virginia. According to Forbes, it is the 6th largest privately held company in the U.S. Its subsidiaries include Wrigley Company, Pedigree Petfoods, Royal Canin, Banfield Pet Hospital, Seeds of Change, Nutro Products, VCA Animal Hospitals, Mars Japan Limited, etc.

13) Intel: Intel is a multinational corporation and technology company. It was founded by Gordon Moore and Robert Noyce in 1968 and has its headquarters in Santa Clara, California in the Silicon Valley in the United States. Its subsidiaries include Intel capital, eASIC Corporation, Intel Ireland, Mobileye, Wind River, Movidius, Habana Labs Ltd., Rivet Networks LLC, SigOpt, etc. They employ 1,00,000+ employees worldwide and Argentina, India, Japan, Ireland, France, and the U.S. considers it a great place to work at.

14) Novo Nordisk: Novo Nordisk is a multinational pharmaceuticals company. This Danish company was founded back in 1923 by Hans Christian Hagedorn and has its headquarters in Bagsvaerd in Denmark. Novo Nordisk has its production in a total of eight countries and offices spread across five different countries. Its subsidiaries include Novo Nordisk Inc., Corvidia Therapeutics Inc., Emisphere Technologies Inc., Ziylo Ltd., Aldaph SpA, etc. Countries like Mexico, Italy, Netherlands, Switzerland, the U.S., etc. name it to be a great place to work at.

15) Nestle: Nestle is a MNC that is the largest food & beverage company worldwide in terms of revenue, etc. It was founded by Henri Nestle in the 1866 in Vevey, Switzerland, which is its current headquarters. It has various subsidiaries including Nespresso, Garoto, Garden Gourmet, Gerber Products Company, Blue Bottle Coffee Company, Nestle Waters, etc.

16) The Coca-Cola Company: The Coca-Cola Company is considered one of the Biggest companies in the world. It manufactures, retails, and markets non-alcoholic beverages and syrups. This MNC was founded in the late 1800s and is headquartered in Atlanta, Georgia in the U.S.A. It has several subsidiaries under it including Costa Coffee, Minute Maid, Barq’s, Honest Tea, Fuze Beverage, Tropico, Odwalla, Jugos del Valle, etc. Countries like Chile, Peru, Brazil, Spain, Australia, etc. name it as a great workplace.

17) Roche: Roche is a Multinational healthcare company involved in the production and marketing of Pharmaceuticals, and are also involved in Diagnostics. Roche was founded by Fritz Hoffmann-La Roche in 1896 and has its headquarters situated in Basel in Switzerland. The various subsidiaries belonging to Roche include Genentech, GenMark Diagnostics, Chugai Pharmaceuticals Co., Spark Therapeutics, Flatiron Health Inc., Kapa Biosystems Inc., Ventana, Medical System, etc. Countries including Denmark, Colombia, Venezuela, Ecuador, etc. vote as a pharmaceutical great to work at.

18) Accenture: Accenture is a multinational company providing professional technology services including strategic, operational, digital, tactical, consulting support to their clients. It employs around 537k employees all around the world and has locations in 200 cities and operations across 50 countries. It was founded in the U.S in the 1950s, and later on, it expanded to other countries worldwide including Europe, Asia, etc.

20) Syngenta: Syngenta is an MNC providing products and services related to agricultural science and technology including seeds, crop protection products. It was founded in 2000 with headquarters in Basel, Switzerland. Its other locations are in Tel Aviv, Shanghai, and Chicago.

So, this was our list of the top Multinational Companies In World that are considered as great companies to work for.