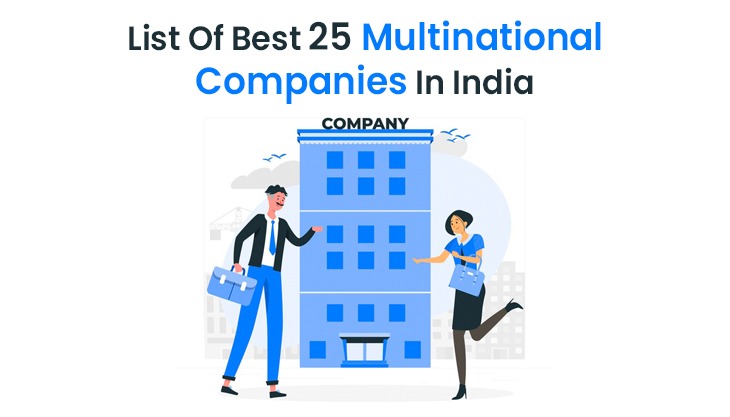 A multinational company means a top company operating with several offices around the Globe. These multinational companies in India are nothing new. The industrialization of Europe and colonization of India by Britain played a key role in MNCs arriving on the shores of this country. The first MNC company to arrive in India was Von Siemens, it is a german company. In India, this company is involved in top projects including elevators, power supply, Industrial machinery, and more.

India gets a lot of benefits from top MNCs including huge investments, optimum utilization of natural resources, reduction in a technological gap, and boost of economic structure. Due to India’s growing economy, globalization, and its market, many multinational companies in India are growing tremendously.

Every student has a dream of working in the top MNC companies in India and even abroad. The real reason is it outsources the personal as well as organizational responsibilities with the best packages. It offers you the experience to move internationally. Also, here you gain experience, credibility, and confidence to stay ahead of others in competition.

Some of the Top multinational companies In India are:

Apple Inc was established in 1976. It is an American multinational company that sells software, phones, laptops, and various online services. Apple brand is well-known for electronic consumers and some of their top products such as iPad, iPod, iPad, and Mac. This company also has branches in India.

Amazon is the largest E-commerce company working globally and is counted among the top MNC companies both in India and around the Globe. It was founded by Jeff Bezos. It is headquartered in Seattle, America. It is one of the four top MNC that comes under the list of four big companies along with Microsoft, Apple, and Google.

Hindustan Unilever is an Indian MNC company established in 1931. It is the leading food and beverage manufacturing company in the world. It is headquartered in Mumbai, India. This brand is specialized in the production and distribution of food, consumer goods, water purifiers, and consumer goods.

Samsung is a famous brand founded by Lee Byung-Chul. It was established in 1995. The brand specializes in electrical and technical products. It is a South Korean multinational company headquartered in South Korea.

Adidas is one of the top MNC in India. It is a sports items manufacturing company well-known for its quality items. It was headquartered in Herzogenaurach, Germany. It is the leading producer of sports garments and shoes as well as casual footwear and clothing.

DHL is an American German courier company established in 1969. It was founded by Adrian Daisley, Larry Hillblom, and Robert Lynn. It was headquartered in Bonn, Germany. It is one of the top logistics companies in the world. They are well-known for air and sea courier.

Mercedes-Benz India was founded in 1994. It is one of the leading manufacturers and sellers of high-class automobiles in India. It was owned by Daimler AG and headquartered in Pune. It was one of the pioneers of the luxury automobile market in India. It is the top Multinational company in India, spreading over 100 Acres at Chakan, Maharashtra.

Garnier is one of the leading cosmetic brands founded in 1994. It is a mass-producing cosmetic company headquartered in France. It is the largest cosmetic company in the Indian subcontinent. They produce herbal products and cosmetics that are trusted by a lot of people.

Microsoft is a renowned MNC company founded by Bill Gates and Paul Allen. It was founded in 1990. The brand is famous for its operating systems, Internet Explorer, Software products, and Microsoft Office Suite. In India, It is headquartered in Hyderabad.

IBM is a leading MNC company with a Head Office in Armonk, New York. It was founded in 1992. In India, it is headquartered in Bangalore. They provide a variety of services including business consultancy, storage solutions, applications management, middleware, software, and nanotechnology.

Nestle is a top brand headquartered in Vevey, Vaud, Switzerland. It was founded in 1912. It is a transnational food and beverage company founded by Henri Nestle. Some of the Nestle products in India are Milkmaid, Bar one, Kit Kat, and Nescafe.

Procter and Gamble have a strong presence in several niches in India like grooming, healthcare, beauty, and household care. It was founded by William Procter and James Gamble. Their top products include olay, Pampers, Oral-B, Gillette, and Duracell.

Coca-Cola is a leading Multinational company founded by John Stith Pemberton. It was founded in 1993. They are the manufacturer of famous, non-alcoholic beverages including Limca, Thumbs up, Minute Maid Juices, Coca-cola, and Sprite. In India, it is headquartered in Kolkata.

PepsiCo was formed in 1965 and is operated in India as Pepsico India Holding Private Limited. It was founded by Caleb Bradham. Their brands include Tropicana, Mirinda, Seven Up, lay, etc. Currently, this company is headed by Indira Nooyi.

CITIGroup is an American MNC formed by merging of banking giant Citicorp and financial conglomerate Travelers Group. It was founded in 1998. In India, it is headquartered in Mumbai. This company has more than 700 ATMs in the country.

Sony Corporation is a Japanese multinational company founded by Akio Morita and Masaru Ibuka. It was founded in 1994. They are the largest manufacturer of televisions,headphones, cameras, mobile phones, and memory cards. In India, It is headquartered in Delhi.

TATA Group was founded by Jamsetji Tata. It is well-known for top brands including Tata Steel, Tata Global Beverages, Tata consultancy services, and Tata Communications. It was founded in 1868.

Aditya Birla Group was founded by Shiv Narayan Birla. It was founded in 1857. They are headquartered in Mumbai. This group is present in a variety of sectors including cement, metals, apparel, insulators, viscose filament yarn, BPO, and IT services. They have branches in the Philippines, Egypt, Malaysia, Thailand, and Indonesia.

Google is an American multinational company that started in 1998. It was founded by Larry Page and Sergey Brin. They offer a wide range of services including cloud storage, Google sheets, Google Docs, Hangouts, social networking, and Google Allo.

Cognizant was founded by Francisco D’Souza, Kumar Mahadeva. It was founded in 1994. They offer services such as business process services, consultancy, application services, and IT infrastructure services. They primarily focus on mobile computing, Bpo testing, healthcare, manufacturing, and retail.

The establishment of offices of top mnc companies in India has brought several benefits. It has also increased the country’s economic value and increased employment rate. Many other top companies are looking for ways to Invest in India.

An Exploration Of How Online Advertising Affects Web Design

Smart Contracts In Blockchain: What They Are, How They Work

How To Market A Product: 10 Highly-Effective Ways

How To Increase App Downloads In 10 Simple Steps?