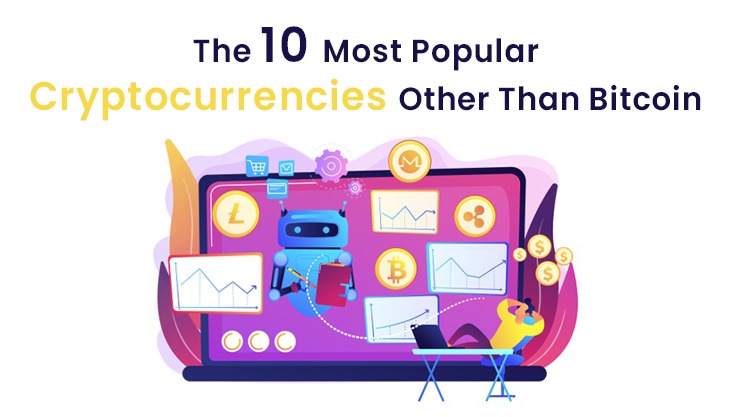 The 10 Most Popular Cryptocurrencies Other Than Bitcoin

Bitcoin was launched over a decade ago and it has been a trendsetter of bringing several cryptocurrencies built on a decentralized peer-to-peer network. Bitcoin is the best Cryptocurrency to invest in. It is at the top of other cryptocurrencies in terms of market capitalization, user base, and popularity. Other most popular cryptocurrencies such as Ethereum are being used to create decentralized financial systems for individuals without access to traditional financial products. Before we take a close shot at some of the best alternatives to Bitcoin, let’s step back and examine what we mean by terms like Cryptocurrency.

It is a virtual or digital currency which takes the form of a token or coins. The term crypto refers to complicated cryptography which allows for the creation and processing of digital currency and they’re across decentralized systems. Cryptocurrencies are developed as code by teams who build in mechanisms for issuance and other controls.

In this blog, we are going to discuss and identify the leading cryptocurrencies other than Bitcoin.

The Top 10 Cryptocurrencies Other Than Bitcoin:

Ethereum (ETH) - It is one of the best Bitcoin alternatives on our list. It was launched in 2014. It has become the second-largest digital currency in terms of market capitalization after Bitcoin. It is a decentralized platform that enables the building of smart contracts and decentralized applications (DApps) to be run without any fraud, control, or interference from third parties. The Ethereum has been issued to create a decentralized suite of financial products that can be freely accessed by anyone in the world, regardless of nationality, ethnicity, or faith. This will make the implications for those in some countries more compelling.

Litecoin(LTC) - Litecoin was created by an MIT graduate, Charlie Lee, and launched in 2011. It was one of the best cryptocurrencies alternatives to  Bitcoin. Bitcoin has often been referred to as “silver to Bitcoin’s gold.” This coin operates on an open-source global payment network that is not controlled by any central bank or government. Litecoin has a faster block generation rate compared to Litecoin, which offers faster transaction confirmation time. It is the sixth-largest Cryptocurrency in the world.

Cardano (ADA) - The Cardano was created based on a research approach by engineers, mathematicians, and cryptography experts. It is an “ouroboros proof-of-stake” cryptocurrency and the project was founded by Charles Hoskinson. The crew behind Cardano created its blockchain through extensive experimentation and peer-reviewed research. The backbone of this coin is over 90 papers on blockchain technology written by the top researchers behind cardano. It is generally called an ‘Ethereum killer’ because it has a more efficient blockchain than Etherum. Cardano aims to be the financial operating system of the Globe by establishing decentralized financial products as same as Ethereum.

Polkadot (DOT) - Polkadot is a unique proof-of-stake cryptocurrency created by Gavin Wood. This digital currency is created to deliver interoperability between other blockchains. Gavin Wood was the member of the core founder of the Ethereum project and left the project after some disagreement. . Polkadot protocol is designed to connect permissioned and permissionless blockchains to allow systems to work together under one roof. As per data gathered in January 2021, Polkadot has a market capitalization of $11.2 billion, and one DOT trades for $12.54. It also enables parallel blockchains with their native tokens or specific use cases.

Bitcoin Cash (BCH) - It is an essential Bitcoin alternative and it holds an important place in the history of altcoins because it is one of the most successful hard forks of the original bitcoin. In the digital currency world, a fork takes place as the result of debates and arguments between developers and miners. Due to the decentralized nature of cryptocurrencies, wholesale changes to the code underlying the token at hand must be made due to consensus; the mechanism of this process differs according to the particular cryptocurrency. As per data gathered in January 2021, BCH had a market capitalization of $8.9 billion and a value per token of $513.45.

Stellar (XLM) - It is an open blockchain network designed to offer enterprise solutions by connecting financial institutions for making large transactions. It was founded by Jed McCaleb-a member of Ripple Labs. He left his role with Ripple and web to support the stellar Development Foundation. In general, large transactions between banks and investment firms would take several days, several intermediaries, and a need for a good deal of money. By using Stellar there no need for any intermediaries and cost little to nothing for those making huge transactions. It is an open-source blockchain that can be used by anyone on the digital platform.

Chainlink - It is a decentralized oracle network that bridges the gap between smart contacts and the data outside of it. Blockchain themselves cannot connect with external applications in an outside manner, but the chainlink oracle system allows the smart contracts to communicate with the external data. This denotes that the contracts can be executed based on data that even Etherum cannot connect to. This digital cryptocurrency was developed by Sergey Nazarov along with Steve Ellis. As per data collected on January 2021, the market capitalization is $8.6 billion, and one LINK is valued at $21.53.

Binance Coin (BNB) - It is a utility Cryptocurrency coin that operates as a payment method for trading fees of the Binance Exchange. Those who use tokens as a payment method for the exchange can trade at a discount. This coin used the Proof-of-stake consensus model. It is the most used exchange in the world based on trading volumes. It is founded by Changpeng Zhao. It was an ERC-20 token that operated on the Ethereum blockchain. As per data collected on January 2021, Binance has a $6.8 billion market capitalization with one BNB having a value of $44.26.

Tether (USDT) - It was launched in 2014 and one of the popular groups of stable coins. Tether describes itself as a block-chain enabled platform designed to facilitate the use of fiat currencies digitally. These coins enable people to utilize a blockchain network and related technologies to transact in traditional currencies. As per data collected in January 2014, Tether was the third-largest cryptocurrency by market capitalization.  The price of Tether is directly linked to the price of the US dollar. The system lets users make transfers of cryptocurrencies back to US dollars other than actually converting the same to regular currencies.

Monero (XMR) - It was launched in 2014. It is one of the secure, private, and untraceable currencies. It is an open-source cryptocurrency developed stemming from the interest and enthusiasm of cryptographers. It is based entirely on donations based and community-driven. The cryptocurrency has been launched with a strong focus on decentralization and scalability. It allows complete privacy by using a technique called ring signatures. As of January 2021, this digital currency had a market capitalization of $2.8 billion and a per token value of $158.37.