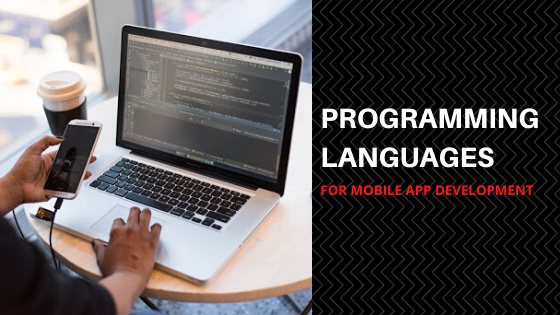 Nowadays the mobile phone becomes an important part of human life due to the features and specifications it offers. For example, we can do anything on our mobile phones such as taking pictures, video editing, texting, calling, alarm, calendar, and much more. The mobile device becomes the replacement of other devices and after the rise of mobile app technology several mobile applications such as Facebook, WhatsApp, Twitter, snap chat, etc are ruling the world. If you are thinking of  Mobile App Development Startup, then you have to choose the best programming languages for mobile apps according to your preferences and requirements. The mobile app development company should be very cautious before selecting the language and do a series of research before going for specific programming languages. In this blog, we have given detailed information about the top programming languages for mobile app technology. About 90 percent of internet users are mobile users, so the business should have an attractive mobile application to create brand awareness among customers, increase profit, and gain popularity among consumers.

List of top programming languages for your mobile app startup

Javascript is the high level interpreted and multi-paradigm programming language which supports dynamic, weakly typed, and object-oriented programming. This is the most preferred language along with CSS, HTML, and AJAX for mobile app development and also it is used for developing web pages. It is a simple language and it has a specific API that facilitates easy integration with arrays, text, DOM, and some regular expressions.

Rust is systematic programming that is sponsored by Mozilla and it is a safe, concurrent language that supports imperative procedural paradigm. The syntax of the Rust language is almost similar to  C++.  The main demerits of this language are there is a possibility that error can occur during compilation which results in the situation of writing optimal code by the developers and also provides built-in support for concurrency.

Python is a high-level programming language that is used for Android development, web development, computing scientific data, and software development. This is the most preferred language for learning and also it supports a variety of application development. The most outstanding examples for python are youtube, dropbox, etc and it has the ability to build apps from scratch. It is the scalable language and it can be run on platforms like Windows, Linux, Unix, and Mac.

PHP is the most popular programming language which is used to develop web applications, websites, and other types of mobile applications. About 78 percent of developers are PHP oriented developers and it is an object-oriented language that is easy to learn. They are used for server-side scripting, creating E-commerce websites, coding project management tools, image process, and Facebook app development.

Structured Query Language is used for programming and it is specifically designed for stream processing in RDBMS. SQL is one of the commercial language relational models and it is based on tuple relational calculus and algebra. It has several scopes like data access control, data definition, data query, and data manipulation. It uses well-established standards that are adopted by an organization such as ANSI and ISO.

Swift is considered as the programming language for the future which is developed by Apple Inc. it is a general-purpose and open-source language used to develops applications that can run on platforms such as tvOS, watchOS, macOS, iOS and Linux. It is developed by inspiration from other programming languages such as Object-C, CLU, Ruby, and python. It is an open-source language and can be used by anyone

It is the most used and popular language preferred by 90 percent of the developers and also it is the most searched language on the internet. It is the official language for android development and it can be run in two ways:  both in a browser and in a virtual machine without a browser. It is used for developing web applications, big data technology, embedded space, android applications, and games.

C++ is a very popular language and compatible with many compilers which can be used along with the Android Native Development Kit to develop android applications. This generic program language is similar to C, C#, and Java. it is the oldest programming language that is widely used in sectors such as health care, finance, manufacturing, and banking.

Ruby is the dynamic, interpreted general-purpose programming language influenced by other languages like Smalltalk. Eiffel, Ada, and Perl. it has automatic memory management and used for developing web apps, mobile apps, etc.

The final decision is up to you, you can choose the best working language based on your objective and preferences which helps the business to grow stronger.