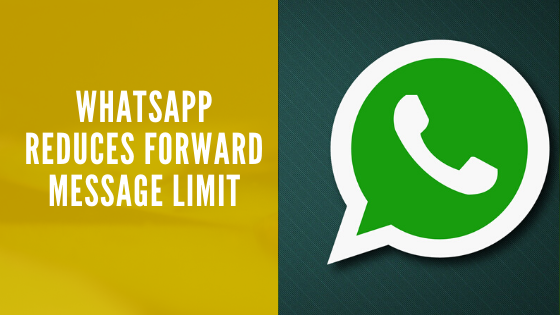 WhatsApp is the widely used social media by most of the users around the world and it is the digital platform that facilitates easy exchange of data in the form of application, document, images, files, and videos. WhatsApp is the private messaging app owned by the giant social networking site Facebook and now the new WhatsApp Update is curbs on highly-forwarded messages. This WhatsApp update is about controlling the spread of misleading information about the coronavirus and it is a deadly disease spreading all around the world. This pandemic virus is destroying the normal situation in the country all around the world and this new WhatsApp update was released on April 4 to reduce the forwarded messages.

As per the statics given by the WhatsApp to Union ministry of information and technology, there was a reduction in the forwarded messages globally among the 2 billion users but the total volume of the messages remains unrevealed. In the digital medium, the spreading of fake news is easy and there is a chance that more numbers can get affected.

This step has taken by the company to prevent the virus and in India, the reduction was about 70 percent. WhatsApp has written to the government states that the virality of highly-forwarded messages has gone down to 70 percent because of reducing the forwarded message from five to one. This new change was introduced to maintain the platform securely and to control the viral message spreading.

This limiting of highly forwarded messages to one chat has great a greater impact on the volume of messages. Globally there is a reduction of about 70 percent on total forwarded messages and this will made the WhatsApp a safe place for keeping the conversation secure. WhatsApp is the microblogging platform used by billions of people around the world and now due to the COVID-19 social distancing, several people got separated. This acts as a communication platform to connect friends and families. In case, this scenario can lead to the spreading of misinformation to a higher level.

In India, there were more than 400 million users registered in WhatsApp, and the company curbs on the highly forwarded message. Last year they have introduced the method of forwarding message to a higher number of users and these messages are labeled with double arrows to show that they did not originate from close contact. In July 2018, WhatsApp released the update to limit the forwarding to five contacts and now it reduced the total number of forward to 25 percent. The research says that WhatsApp has blocked about two million accounts per month to prevent the sending of bulk messages or automated messages. Now currently Whatsapp is working with NGOs, WHO, health ministries, and governments to help the people with correct updated information about coronavirus.

The WhatsApp has now announced the coronavirus information Hub. for example, in case of any misinformation occurs are other social media platforms such as Facebook, twitter then it is easier to identify the origin of the post but if the same thing happened in the WhatsApp then the tracking is not easier due to end-to-end encryption facility.

To manage this malfunction, the chat application has introduced a limit on forwarding messages. So that you can chat only a single time to limit the kicks in forwarded messages. The detailed explanation of the process is when you send a message, WhatsApp will not read the content of the message and it can count the number of messages by reading through the metadata.

Before the Whatsapp update, there were a number of forwards appears in the chat application and there is a large spread of misinformation. To curb fake news this company also testing reverse image search and text search.

Many users forward important information as well as funny memes, videos, and prayers which they find useful. The front line health workers also used this application to organize public events to supports people and this new WhatsApp update will slow down the spreading fake news.